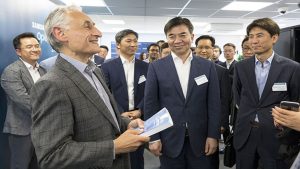 Samsung Electronics UK is to open a new artificial intelligence (AI) lab in Cambridge. It joins Moscow and Toronto as Samsung’s third AI research lab. It will focus on how Samsung can incorporate AI into its products and on the potential of user-centric AI.

Samsung has already recruited Professor Andrew Blake, former head of Microsoft’s Cambridge Research Laboratory to run the facility. Blake has a long history of research into AI and Samsung will hope to capitalise on this. It will also want to attract new graduates from Cambridge University.

“The centre’s research will help us to better understand human behaviour, exploring areas like emotion recognition, and further expand the boundaries of user-centric communication to develop AI technologies that ultimately improve people’s lives.”

AI hots up in Cambridge

Attracting new staff in Cambridge will not be easy. It has become a hotbed of AI work across multiple disciplines. Last month, Cambridge University announced it was making its new AI supercomputer available to commercial companies across the UK. Investments in the supercomputer came as part of the UK government’s AI Sector Deal worth around £1 billion.

Samsung is not the only company to announce investment into Cambridge for AI. Other tech giants also have offices in the town including Microsoft. It has had its own research centre located in Cambridge for over 15 years.

Smaller companies are also flocking to Cambridge. BenevolentAI recently purchased a Cambridge-based company using AI to develop new drugs. It has since announced additional funds to expand research and recruit more staff. Drug development is one of those sectors that sees AI as having the potential to speedup product development while also significantly reducing costs.

Cambridge University is already one of the leading AI centres of excellence in the world. The university is also very business aware. It has invested large sums of money in creating small business estates all over the city. These have attracted a lot of start-ups and talent in the technology and pharmaceutical sectors.

As a result, it should come as no surprise that Samsung has decided to locate its first European AI lab near to the university. However, staffing that lab may not be as easy as Samsung would expect. Blake’s appointment will no doubt help in recruiting staff, especially given his reputation in the field.

It will be interesting to see if Samsung announces plans for joint research projects with Cambridge University.