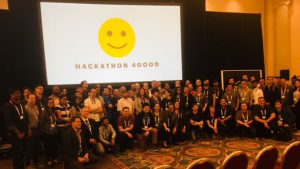 The day before SuiteWorld starts there is still plenty of activity around the Sands Expo Convention Centre in Las Vegas.

Enterprise Times spent most of the day at the annual Hackathon4Good that NetSuite organises. This year is the fifth time it has taken place at SuiteWorld. NetSuite also uses the day to provide training for customers and partners alike. There is also a partner convention.

After the success of last years event the Oracle NetSuite Social Impact team organised an even bigger event. This year 78 people from mainly customers and partners made up 16 teams. A few NetSuite employees either became team members or assisted with any technical issues that arose during the day. The aim was to solve challenges presented by the Girl Scouts and the Abilities Centre, the latter, the first Canadian charity supported by the event.

Girl Scouts and cookies is a national institution. If anything, they are more popular than the organisation itself at the moment. The Girl Scout organisation gains much needed revenue from their sale.

However, the profit share that individual girls earn through their sale is less well organised. All girls earn credits from the sale which they can realise at their local girl scout store or, for a few, at the Girl Scouts online store. The online store, uses NetSuite SuiteCommerce and stocks more than 3,000 items including tents, sleeping bags and higher cost items. It is these higher cost items, unavailable at most local stores, that girls who earn the maximum $500 income want to be able to purchase. As Steve Welner, NetSuite Administer at Girl Scouts of USA commented: “If they raise $500 they want to buy something significant”.

The problem is that the current process is so resource consuming that only 12 of the 112 councils participate in the central gift certificate scheme. If the outcome of the hackathon raises that percentage to above 50% Welner will have deemed it a success.

The hope is not only will the teams create an innovation solution to the problem but they will also deliver analytics for both councils and the central organisation. Current redemption of the certificate stands at 85% and they will hope to push it higher.

This is just one of several challenges facing the organisation. Youth organisations are all facing declining numbers. Using NetSuite and Salesforce Marketing Cloud, the Girl Scouts aim to turn this. The organisation is looking to form partnerships with technology companies to work with young girls on STEM subjects to train the next generation of technologists. This is important. The hackathon retained the same 20% percentage of female participants as it had last year. These programs will take time to work, but one hopes that some will be inspired.

Matt Shaw, Director Revenue Development at the Abilities Centre compared the organisation to a tech start-up. Its vision is to enable communities to become truly inclusive. It has won awards for its 125,000 sq ft centre in Whitby, Ontario. It both creates and runs programs for sports, health, the arts and life skills in an inclusive way for the local community. Its programs are evidence based and it is also now a centre for academic research. Such diverse requirements make it a complex business. It is supported by several applications but few of these are connected in an automated way.

Implementing NetSuite to run the financial side of the business took place in 2014. It now believes that they can do far more. The suggestion that they participate in the Hackathon came from a NetSuite employee. For Shaw this was a refreshing change from other ERP companies. He has experience working with several charities prior to his current position and has never had a vendor contact him in the same way.

This engagement approach from NetSuite was reflected in the commercial world by Kelvin Joseph of Steiner Sports recently as well. Shaw presented the challenge of unifying those systems to or within NetSuite and at least of reducing the manual elements of certain tasks for staff. When Enterprise spoke to Shaw he phrased that challenge as a question: “How do we make better business decision with the technology? There has got to be a way to reduce man hours.“.

16 teams presented a range of solutions to both challenges. The entries were all documented and will be shared with the participating charities. This is so that they can leverage the ideas developed over the day.

The judges declared the winners for Girl Guides was Suite Girl. David Geilhufe, Senior Technology & Social Impact Leader at Oracle NetSuite and the judges chairman revealed they won because of their good use of NetSuite. They used custom records in a simple and elegant way and also leveraged Suite Commerce. They automated every manual element of the current process and added reporting on top. According to Geilhufe it was the clear winner on the judging panel.

The Abilities Centre winner took longer to decide. Ability Maker was the ultimate winner. They eliminated the use of Outlook 365 from the room booking process and created a customer portal to allow people to book rooms as they needed. Administrators could also view the whole calendar for every room across the centre.

Beyond the Hackathon at SuiteWorld

Once the dust settles on the Hackathon for 2018 attendees of Suiteworld are still able to participate in their own social impact. Attendees can write a card to a child suffering from cancer. This is an initiative driven by Alex’s Lemonade Stand, a national childhood cancer foundation. With 7,500 registered attendees for SuiteWorld the charity will hope they reach 3,000 shares of #GiveBack2Alex and #SuiteWorld18. Reaching the target will trigger an additional $10,000 donation to charity from NetSuite.

The hackathon was bigger than last year and arguably more successful. The key message from SuiteWorld this year is “grow”. It is something that the Social Impact team has already achieved this year. There are now more than 1,000 non-profit organisations using NetSuite, at least half of which are using the software free of charge. The number of non-profit organisations using the software outside the US is growing as well. This year one of the benefactors was Canadian, next year it could easily come from the APAC or EMEA regions.

The next step is to grow with ambitions outside of North America. The team is aiming for success in Asia and Europe, specifically the UK where it is looking to recruit new team members.