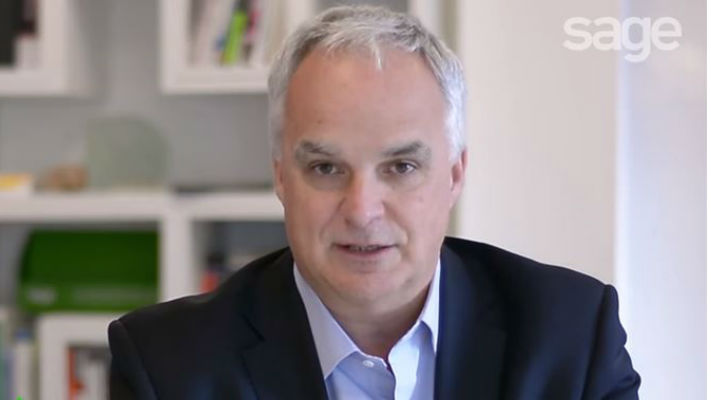 Rather than running a major convention this year, Sage are running Sage Sessions around the country. Enterprise Times attended the recent one held in London and had the opportunity to talk to Alan Laing, Managing Director United Kingdom & Ireland at Sage. Laing had earlier delivered the keynote in front a packed audience. With 1,000 people registered, over 450 arrived in time to see the initial keynote session. It was a popular event and, if anything, more people turned up than expected.

Laing later explained that the reason for several smaller events around the country was a customers requesting them. The majority of the Sage customer base are SME’s who do not want to travel far due to the cost. However, the medium sized and larger enterprises would probably prefer a larger event. Laing admitted that Sage may consider another larger Summit again in a few months.

What are customers and accountants saying?

Sage represents a large proportion of businesses in the UK with its four product streams of accounting, people, payroll and banking & payments. Laing spoke about how Sage is hearing several messages from those businesses, without detailing them on stage. We asked him what those messages were.

“Late payments is an issue.”

What are Sage doing to help small businesses get paid earlier?

“One, we are going to prioritise small businesses in our own eco system, prioritise small business as suppliers. Secondly, make sure they get paid on time. Thirdly, talking to the government about what they put in place about plc’s. For example, it is voluntary to file your payments record and the number of plc’s that have is relatively few. Fourthly, work with the governments to make sure that they are prioritising small businesses in the UK and that they pay them on time. Stephen [Kelly, CEO Sage] was pioneering that when he was at the Government.”

Will Sage will be successful in pressurising government to legislate making that payments record mandatory? Unlikely but as more and more companies, especially small companies, migrate to the cloud there is more data available for companies like Sage, Xero and Intuit to start sharing data about good and bad payers.

Change is coming, should we worry?

Laing continued: “Another message we hear is “help us make sure that some of this stuff coming. Is it real? Do we have to pay attention to it?”

He was referring to the three big topics of the year, Making Tax Digital (MTD), GDPR and Brexit. He covered the first two adding:

“Well GDPR you absolutely do, there is no choice. MTD, we know what you are expected to do by April next year. How can we legislate for the income tax piece? There is not enough guidance about it yet and by the way I think that there will be an election in the middle of it.”

As for Brexit few people know anything definite yet. We asked Laing what he felt the questions that needed answering are.

“How realistic is it that we will get all these trade agreements in place by March next year?

“What kind of certainty can you give small business that you can establish a business in the UK and nothing is going to change essentially?  “

“Also, what uncertainty is coming? Will we see more legislative change? Will we have different labelling of bananas and that stuff?

“In Ireland there are a lot of cross border concern. If we are going to have borders how are we going to make sure that suppliers can deliver to small businesses?”

The changing face of accounting

The final message from customers was about how businesses can reduce the burden of administration. Laing does not believe that all accountants are up to speed with the latest technology that Sage (or others one assumes) can offer. He has a clear view on how only a few accountants are delivering the business advice he believes they should. Laing shares a common view on accountants held amongst the software vendors as he explained further.

“I split accountants into three buckets. There are the enlightened ones, at the top end of the market where it is all about technology, all about being a business advisor, all abut analytics, early warning systems.

“There is a huge rump of accountants in the middle who are frankly not sure how far they want to go on that technology curve. They feel that some of that may take away from good old-fashioned bookkeeping. They don’t want to let go of that because they see that is the way they have always made money. But they do recognise that technology is something that is going to save them time and that they are going to be able to be more productive.

“Then there are the bottom ones, luddites, who are never going to get there.”

That technology change is driven by cloud software such as Sage Business Cloud. It is something that accountants need to wake up and understand if they havn’t already. Laing shared a statistic that shows how fast cloud adoption is picking up. He said: “Adoption of cloud in the UK is going faster. Something like 34% of all spend in the UK was on cloud in the UK in the last 12 months.”  (The latest IDC model for UKI says 2017 spend = $7,583k, of which $2,561k was “Cloud” = 34%.)

What is the Sage strategy for cloud

Late last year Sage announced Sage Business Cloud (SBC). However, not all customers are using the software within it and Laing believes that Sage now offers its customer base a choice. He explained:

“We want to have a cloud proposition that provides all of the efficiencies and cost certainty that business is asking for. If you are a customer on Sage 50 you have a choice. You can do one of three things. Stay where you are, move to Sage 50 Cloud, which is cloud enabled but not full cloud. It has Office 365 integration, Stripe integration and all the other integrations that are coming. Or go to a pure cloud (application) with Sage Business Cloud accounting, which is a completely new product. It is not the same as Sage One of three years ago.”

The important aspect of cloud is that Sage will not do it alone. Over the last few years they have signed several strategic partnerships. Some have waxed and some have waned. We asked Laing what the status of them is now.

“Microsoft is going from strength to strength. Doing a lot more with MS Office integration into Sage 50C, and 200C. We are continuing to work with Microsoft labs at a strategic level around AI and machine learning. The Microsoft relationship is much more at a technology level and I believe we are the partner for Microsoft on Office 365. A lot of the testing we are doing is way ahead of the testing that others are doing.

“Apple we are deploying the Apple integration for SBC accounting which will open up the Apple ecosystem. We announced that 12 months ago and it has taken a bit of time to deliver.

“We will continue to work with Amazon, AWS and LinkedIn. There are new partnerships coming.”

Not just about accounting software though

Laing had spoken a lot about the accounting, finance and enterprise management software but Sage has other products as well. Laing was keen to show that there is development on those products too. He also sees them as a competitive differentiator for Sage.

“Payment, payroll and people and all the capability around that is unique to Sage. Nobody else if you look at Xero, Intuit, Netsuite who we are competing with, nobody else has it.

“That’s why the SBC is so important because that platform will eventually integrate all of that into our total cloud solution. Today there is some of that. In Sage 50 you can have payments. In Payroll, 53% of UK employees are paid using Sage Payroll. That will become even more important in the cloud. It is not that we are not focused on it because that’s our differentiation. We are doing more around partnerships on payments.”

The Sage journey continues. Laing is proud of what he has achieved in the first year but recognises that there is a lot more to do. Sage is a large company, with a large number of developers and customers can expect some bigger announcements about products in the coming months.

One of these is the launch of Sage Intacct onto the UK market. It will deliver a financial solution that plugs some of the industry gaps that Enterprise Management has. Sage also has a huge challenge in moving the “rump” of accountants onto the cloud. It is a challenge Laing is clearly ready for and the Sage Sessions and smaller events will enable the company to reach accountants across the country.

A conversation with Forterro – almost!

What is Aptean Industrial Manufacturing ERP?

Finding out more about NetSuite SuiteProjects