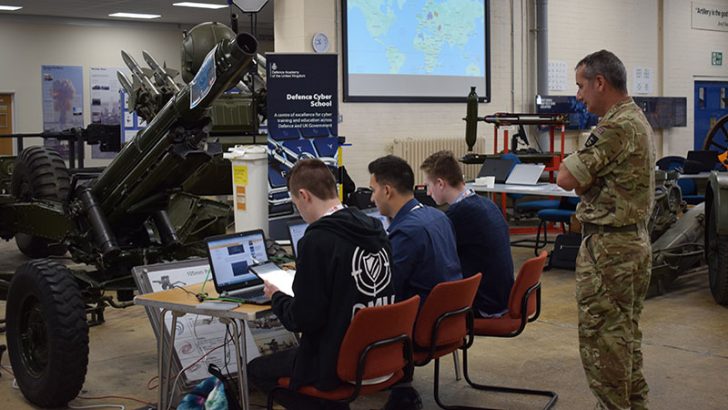 The latest round of the Cyber Security Challenge took place at the Defence Academy of the United Kingdom (DAUK). It saw the competitors deal with a number of challenges, not least of which was a mock cyber-attack on Internet of Things (IoT) connected soldiers.

The location of this round of the challenge and the subject matter is no coincidence. DAUK has just revamped all of its cyber courses for senior officers. There are also new courses for other ranks being developed. Alongside this it has also looked to bring in more commercial companies to help teach courses. Earlier this year Enterprise Times spoke to Paul Bleackley, Cyber Education Manager, Defence Academy of the UK about his goals for the facility.

The scenario for this round of the challenge was a hacking attack against the experimental soldier geo-tracking technology. The teams were faced with a number of tests around the scenario. What they were not prepared for was the attempt by a mock hacktivist group to conduct a man-in-the-middle attack. The attack severed communications between the challengers and the soldiers.

This was a real world attack that the MoD is particularly concerned about as it becomes increasingly reliant on technology. The days of bodging together vehicles and communications are long gone. Today’s soldiers rely on technology even more so than the average schoolchild.

The winner in this round of the Cyber Security Challenge was 15 year old Edward Ouzman. He will now go forward to the end of year finals. He has also taken the first steps towards a career that could be worth more than £60,000 pa.

Ouzman is the latest in a string of contestants who are still at school. In the last two rounds there have been five contestants aged under 18. Interestingly none of them came through the Cyber Games which is aimed at schools. However, they are all likely to have taken part in the CyberCenturion online challenges to showcase their abilities.

There are some significant advantages to those under 18 in taking part in this competition. Several of the sponsors such as HMGCC and BAE Systems have apprenticeship schemes in this area. Taking part and doing well in the cyber security challenge and its other competitions is an opportunity to stake a claim for one of these apprenticeships.

The result also vindicates the emphasis on engaging with a younger market for the Cyber Security Challenge. Former CEO, Stephanie Daman, who sadly died a few months ago, was a big supporter of getting schools involved.

First and foremost it means that the doom mongers who think we will have around a decade of skills shortages are mistaken. There is a lot of untapped talent among those under 18. Some of those will have left school without any formal qualifications. The Cyber Security Challenge is working with the National Crime Agency and its Prevent programme to engage with this group.

Those who are still at school were brought up with technology and, in particular, social media. They might be naive in some of their excessive online posting but they do understand the technology. That is part of the battle in this industry. Another part is having the skills to combat the social engineering that hacking groups carry out. Widening the age group also brings more diversity into cyber security teams and that can only be good for the industry.

There are still several rounds of the challenge to go and the European Championships are just around the corner. The UK is doing well when it comes to home grown talent and, as recent challenge competitions show, has a strong and growing base from which to develop future talent.