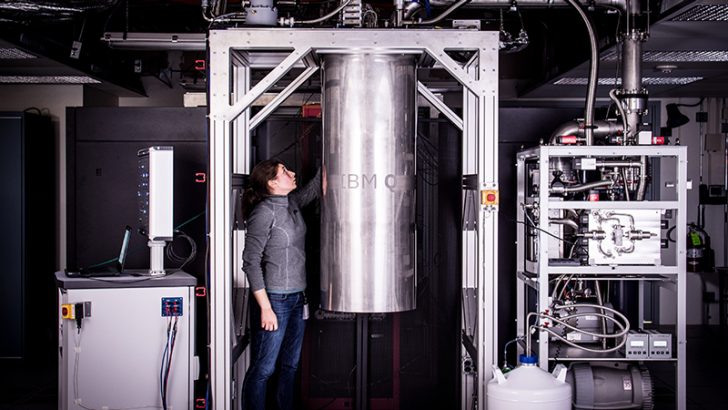 IBM has successfully built and tested two new universal quantum computing processors. The first one is aimed at developers, researchers and programmers. Many of these have been working with the APIs IBM released for the IBM Quantum Experience in March. They will now be able to move from testing their applications on a five quantum computing (qubit) processor to one with 16 qubits. This is a significant jump forward and it will be interesting to see if this leads to an acceleration in academic papers on the benefits from quantum computing.

The second processor is arguably far more interesting. IBM delivered a roadmap for its quantum computing journey that would see 50 qubit systems by 2020. It said that early access IBM Q commercial partners would get a new quantum chip this year and it is delivering them the prototype of that chip. It will have 17 qubits and a number of other technologies. At present IBM is talking about its current quantum computers as being accelerators to classical computers.

The delivery of this chip raises two questions. The first is what level of performance are early access customers getting from using a 17 qubits accelerator? Secondly, is the 17 qubit system capable of being a standalone solution and, if so, what level of classical computing is it comparable to?

According to Arvind Krishna, senior vice president and director of IBM Research and Hybrid Cloud: “The significant engineering improvements announced today will allow IBM to scale future processors to include 50 or more qubits, and demonstrate computational capabilities beyond today’s classical computing systems. These powerful upgrades to our quantum systems, delivered via the IBM Cloud, allow us to imagine new applications and new frontiers for discovery that are virtually unattainable using classical computers alone.”

What problems is IBM Q aimed at solving?

Interestingly this has changed since the March announcement. Back then IBM was targeting five areas, all of which it has invested a lot of money in solving with existing computer technology. The five were:

The latest list compresses this into four areas with Business Optimisation showing that this is more than just a research project. The four areas listed in this release are:

What is not known is how many of the 300,000 experiments already run on the IBM Quantum Experience are aimed at these target areas. It would be useful to know how quickly current researchers and business partners are testing the limits of quantum computing.

How close are we to commercial scale quantum computing?

IBM set out its roadmap to say that by 2020 it expected to deliver commercial scale quantum computing through the IBM Cloud. It is adopting the same model for this as it has with IBM Watson. Pick key industry areas and then use the cloud to deliver it. Customers don’t have to justify hardware costs while research teams will be quick to experiment with the technology.

So far there has been limited feedback from the early adopter customers who took to the platform in March. That they have had a significant upgrade since then will no doubt please many of them. However, there is a need to understand just how much quantum computing is delivered as an accelerator. IBM is about to deliver IBM POWER 9 to the market and all the public presentations show that the key focus of that processor is the accelerator technology.

The biggest indicator of where we are in terms of a commercial deployment will only arrive when we get details of how well a 17 qubit system compares with current technology. Until there is a clear indication of where it sits in terms of performance it is hard to assess how close we are to IBM reaching its target of delivering a quantum computer that is more powerful than any other computer.

IBM is heading into a large number of launches this year. IBM Power Systems will launch the POWER9 processor. There is also a refresh due for the z Systems mainframes with the likelihood that this will not just focus on z14 but also on a new generation of LinuxONE boxes. In the background IBM is making blockchain announcements at an almost weekly rate. There is a danger that some of the questions over quantum computing will get lost in the noise which could be why IBM has made this announcement now.

Whatever the reason, we are moving faster and faster towards a whole new computing paradigm.