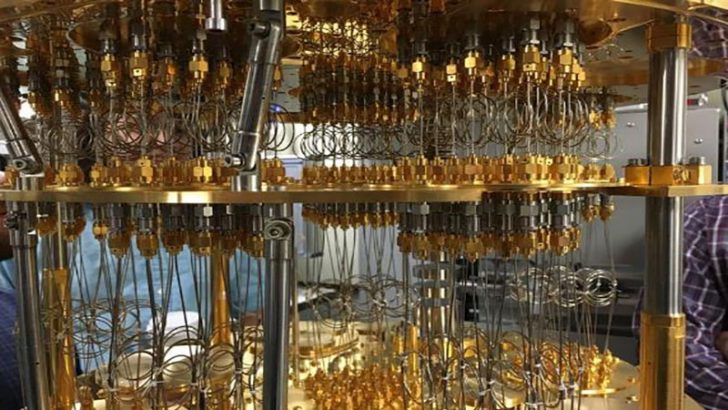 Quantum Computing has been a target for the IT industry for decades. A year ago, IBM talked about its own expectation for quantum computing and then released cloud access to a prototype Quantum Computer. Today is has announced the first commercial quantum computing platform, “IBM Q”, accessible via the IBM Cloud. It has shipped developer tools and an upgraded simulator for developers. All of this puts IBM ahead of Google in the race to deliver quantum computing.

Arvind Krishna, Senior Vice President of Hybrid Cloud and Director for IBM Research said: “IBM has invested over decades to growing the field of quantum computing and we are committed to expanding access to quantum systems and their powerful capabilities for the science and business communities. Following Watson and blockchain, we believe that quantum computing will provide the next powerful set of services delivered via the IBM Cloud platform, and promises to be the next major technology that has the potential to drive a new era of innovation across industries.”

Why is Quantum Computing important?

IBM, AMD, Intel, ARM and the other major processor companies are already down to 14nm technology. At 5nm, the semi-conductor industry believes it will hit an effect called quantum tunnelling. This is seen as spelling the end for existing semiconductor engineering. Despite this, some scientists have produced chips using 4nm and even 2nm technology but they do not believe that they would be able to operate in the same way as current processors.

At present, there are a range of problems that cannot be solved by current computing. These are problems that require computers bigger than we can build today. The problem is the ability of the systems to model and resolve certain problems.

What problems will quantum computing solve?

Turek says there are a range of hard problems that quantum computing will solve. One of the most commonly used one is in order fulfilment with minimal waste. The example Turek gave was a customer ordering various different lengths of wood. The supplier wants to eliminate wastage to see if they can supply the goods and reduce the cost of shipping by maximising each shipment.

It is a problem similar to that faced by a lot of materials companies all of whom invest large sums of monies in solutions. Turek says that there comes a point where standard computing is unable to effectively resolve the problem. He believes that this is something ideally suited to quantum computing.

This ties in to another example, Shor’s Algorithm. It states: “a task taking 2100 seconds (1025 days) on a classical computer might take just 100 seconds on a quantum computer.” This is not about theoretical science or solving the universe but real-world problems. Cryptography and cybersecurity are good examples of the power of Shor’s Algorithm. Breaking some of today’s encryption technology will take years. With quantum computing it could be hours, minutes or seconds.

Machine learning is another candidate for quantum computing. The time taken to ingest and understand data to create new models or ideas will be significantly reduced. This also applies to searching big data to find new truths and business models.

Developing new medicines by modelling the interactions between components is something IBM is already doing with Watson. At Baylor College of Medicine, Watson was able to speed up research by a factor of at least six. Turek expects quantum computing to deliver far more than this as it develops over the next few years.

Turek is realistic, saying we are still some way off the delivery of a quantum computer that can outstrip the biggest standard computers. The next few years will see a hybrid mix of standard and quantum computing. That period of time will enable an entire ecosystem to develop that will advance quantum computing.

Since the IBM Quantum Experience launched last year, 40,000 users have run over 275,000 experiments. It has also been used by scientists in over 100 countries and has resulted in 15 third-party research papers. IBM has worked with universities and other organisations to build up the skills and knowledge required for a quantum computing ecosystem.

One of the key things that is needed, according to Jerry Chow, Manager of Experimental Quantum Computing IBM is: “a new set of quantum science. We need assembly languages, interfaces to standard computer libraries and a framework to build applications.”

One of the major challenges for quantum computing is the need to cool systems to a 15 millikelvin, colder than outer space. Chows says that IBM has had to develop its own dilution refrigerators to get to these low temperatures. What is interesting is that by offering IBM Q as a cloud-based service, IBM is taking the cost and complexity away from customers by providing them with systems it is paying to build and run.

According to an analyst at Creative Intellect Consulting: “This is a smart move. It allows Chow and his team to bring in a wide range of researchers and developers to build applications. With IBM providing new APIs that will be exposed through IBM Bluemix, it opens quantum computing up to everyone. The promise of further development such as software development kits (SDKs) in the near future widens the appeal of IBM Q even further.”

A range of qubit devices

Chow says that IBM has laid out its new qubit devices on silicon. It uses this to enable it to scale-up to provide new solutions. The IBM Quantum Experience has been using a 5-qubit device for over a year. There is an excellent article by Chris Lee of Ars Technica UK explaining how it works.

Chow believes that IBM is able to scale-up the number of qubits that customers will require for early access commercial systems. This is important because Turek has said that IBM sees the existing solutions as accelerators for standard computing systems. This is interesting because IBM is already using GPUs and other accelerator technologies inside its new POWER9 processor. By talking about quantum computing as another form of accelerator that can be scaled depending on the number of qubits, it can slot quantum computing into its existing hardware roadmap.

To experience the five-qubit quantum processor that IBM already has on the cloud Chow says: “customers can use the quantum composer. It is a graphical tool that makes it easy to learn how to understand the concepts of uncertainty, superimposition and entanglement.” It can be accessed via any web browser here.

Is quantum computing ready for commercial use?

This is an interesting question. Turek suggests it already has a place as an accelerator. For many people commercial grade will be when quantum computing stands on its own and not as part of a hybrid solution. Creative Intellect Consulting told us: “IBM has shown analysts a chart that says we need to have systems that exceed 100 qubits for that to happen.

“It is already delivering systems up to 20 qubits with the IBM Quantum Experience. This announcement will allow it to build systems up to 60 qubits which it will make available first to the IBM Research Frontiers Institute members. Beyond that it expects to see computer scientists get involved as the first 100 qubit devices are built. These are likely to be used for big data and complex analytics using real-world data.

“The commercial phase with materials companies, pharmaceuticals, industrial and chemical as well as finance will be the last phase in the sequence. At the rate IBM is advancing the technology we would expect to see this last phase towards the end of 2018. Much, however, will depend on how quickly IBM can build out the ecosystem Chow wants around IBM Q. The more companies it brings on board the better.

“One way to do that would be to follow the IBM Power Systems division who open sourced the technology in its POWER8 processor. The question is whether IBM is willing to give away a technology with quantum computing that would give it a substantial market dominance.”

This is a huge announcement by IBM that will take weeks to fully explore. With IBM InterConnect 2017 starting soon in Las Vegas, we can expect to hear more about this from IBM. It will be interesting to see how quickly IBM can advance quantum computing. Can it deliver a fully commercial solution by the end of 2018? If it does, we could see some of the longest running scientific problems finally being resolved.