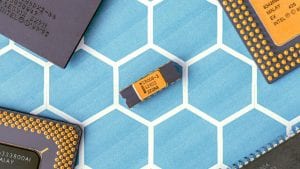 Semiconductor makers cashed in during the pandemic, with 2020 semiconductor revenue up 10% to US$466.2 billion. That number comes from the latest Gartner market share analysis of worldwide semiconductor sales. The big winners were those involved in components used in PCs and handsets. This is because “work from home” caused a significant increase in the sales of PCs.

Working out the winners and losers is a complex task. In sheer financial terms, Intel was the big winner in 2020, with revenue up 7.4% to over US$72.7 billion. It was followed by Samsung (10.2%, $57.7 billion). SK Hynix, who purchased Intel’s NAND flash business, was a significant winner although it showed stronger growth than Intel and Samsung (16%, $25.8 billion).

However, adjust those figures by revenue growth, and it all looks very different. AMD rocketed in at 46.6%, driven by demand for its PC and server business. NVIDIA was close behind (45.2%) with demand for GPUs for gaming and machine learning/AI systems. In third place was MediaTek who also saw significant growth (38.1%) as demand for tablets, 5G and WiFi 6 chips soared.

Which semiconductor markets lost out

Not everyone was a winner. Automotive saw a significant decline by 5.6%, $38.7 billion and the pain might not be over. That decline has already caused significant problems for automotive manufacturers who are struggling to deliver new vehicles due to chip shortages. Subaru has already closed its Yajima plant for 17 days due to this problem. Adding to that pain is the recent fire at Renesas in Japan, which has caused other automotive manufacturers to halt production.

Those closures come with significant financial costs. There are suggestions that automotive manufacturers could lose tens of billions of dollars in sales in 2021. That is because production, which should be growing as economies come out of the pandemic, is actually declining.

It is not just automotive that is taking a big hit. The mundane items we take for granted are also a major problem because high volumes and low margin make them unattractive. Take routers. One major producer of chips, Broadcom, saw an increase in revenue of just 2.8% last year. At the same time, it says it has sold 90% of its expected 2021 supply. According to Bloomberg, it is just one reason why there is a sixty-week delay on router orders.

It is hard to see either of these markets improving soon. They both rely on low-cost chips, and hard-pressed fabrication facilities are focused on lucrative high-margin markets.

Trade wars and a lack of facilities

The trade restrictions imposed by the US in 2020 as part of its battle with China has also had repercussions. It not only limited access to technology for Chinese companies, it also created a shortages of products. One of the reasons for this is that those companies responded by buying in large stocks of semiconductors. This created shortages at a time when fabrication facilities were unable to change production to replace inventories.

One solution to this is to build more fabrication plants but at a cost in the tens of billions, it’s a huge investment. In the US, three companies, Intel, Samsung and TSMS have signalled their intention to build new plants. However, none of them have broken ground and started construction. It is likely that they are holding out for lucrative subsidies from states that are desperate for jobs. They may also be waiting for the US government to throw money their way to solve its high-tech supply chain problem.

The big unknown at the moment is the US. Will the Biden administration sink vast sums into getting plants built in the US to resolve the supply chain issues shortages have exposed? It will be tricky to get the votes to push bills through with enough spending to cover it. Even if it did happen, what would the payback time be? How much extra tax would those companies have to pay to cover any government loans?

Outside of the US there are plans for new facilities in the EU. The EU wants to have 10% of the global semiconductor market within 10 years. The question is not can it build the facilities but can it build all the other components of a successful chip industry to support the plants? There is no question it can consume the output but it needs to be able to create the IP for the chips.

The increase in semiconductor sales last year is good but should it have been better? There is no question that there was scope for greater growth, but several factory fires and production hiccups limited growth. As we move into 2021, the question is, can it top 2020’s growth? In theory, yes, but problems with automotive and low-cost chipsets for routers raise questions.

There is no question that there is a severe shortage of capacity in the market. However, building new fabrication plants costs billions per plant and takes years. Additionally, those plants need to look at what technology they are going to support.

Now that remote working is here to stay and most people have their technology, where will 2021’s top performers come from?