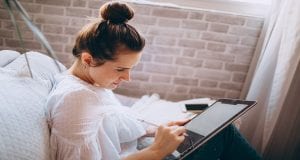 Research from Citrix shows that 75% of UK workers will take a pay cut to work at home permanently. The average pay cut was 14% and, for many, would be covered by savings on commuting and overly expensive lunchtime sandwiches. However, how many have calculated additional costs of working from home is not evidenced in this research.

The results come from a poll of 1,000 UK office workers conducted by OnePoll. It asked respondents a range of questions from age to industry, cost of living, property affordability, and rent costs. While it could have done with some qualitative follow-up, it does add to the current discussion of work post-COVID-19.

Darren Fields, Regional Vice President, UK & Ireland, Citrix, said: “We’re now in a world where employees have seen the potential that remote working holds to improve their work/life balance – so much so that they’re willing to forgo a significant portion of their salaries to achieve this on a permanent basis. It shows that despite calls to get people back to the office, there is a growing demand for a permanent change to where we work.”

What is driving this focus on remote working?

It’s too simplistic to say that the current pandemic is the driver for greater remote working. Employees have been looking for this move for some time. However, employers have always struggled with trust issues and concerns over productivity. So what other reasons, apart from the pandemic, do we learn from this survey?

Living in a big city: Before the pandemic, 45% felt this was a positive for career opportunities and progression. Only 8% felt it was a negative. That has now changed. Only 25.7% think it is a positive, with 10% seeing it as a negative.

Moving to a rural area: Rural areas are notorious for poor broadband. Yet 17.5% were very likely to go rural and 31.1% somewhat likely if they could get the right level of connectivity. Interestingly, 14.6% already live in rural areas with 3.3% having done so during the pandemic.

Relocate to the suburbs: The majority (21.9% very likely, 35.6% somewhat likely) would consider moving out of the city to the suburbs if it didn’t impact their ability to work.

There was little surprise in the reasons given for moving. 57% said the cost of living in a city outstripped their salary increases. A further 48% said that they couldn’t afford to buy in a city. Meanwhile, 45% said that city rent was more than 30% of their monthly salary. Perhaps the biggest non-surprise was 76% saying a move to the suburbs or rural areas was about a healthier work/life balance.

What about that willingness to take a pay cut?

There is always a gap between people saying they would take a pay cut and then actually seeing this happen. While they might be happy to trade off savings in commuting costs and city living for life in the country, there are other issues to consider. For example, a pay cut impacts the size of mortgage and borrowing, and can also eat into savings. More importantly, you will have to calculate extra costs in power, heating and other bills. These are notoriously hard to calculate in advance of making any move.

But what about those numbers? A close analysis shows that they differ by age range, region and by role. The results are also affected by an imbalance in some of the age groups. For example, only 3% were under 24, while almost 35% were 35-44. This latter group is likely to have already established itself in terms of property, career and home life. As such, its priorities will be very different from those in younger groups.

Does it matter where you live?

Get outside of that London catchment area, and the numbers become much more interesting. In the West Midlands, more would reject a pay cut than accept one. The South West and Scotland also shared that view. In fact, 50% of respondents in Scotland rejected the idea of a pay cut.

In Wales and the North East, over 36% would accept a 20% pay cut. Interestingly, neither region is known for costly commuting costs, so in both cases, this would likely represent a pay cut in real terms.

Can technology fill the work gap?

Yes and no. The biggest challenge is connectivity. Successive UK governments have talked about investing in broadband. Every single one has later backtracked on timescales and the cost of any roll-out. They are not the only ones failing to deliver promised broadband schemes.

In 2016, the UK government brokered a deal between Openreach and the Home Builder Federation (HBF). It was supposed to ensure that all new build properties in the UK were equipped with Superfast broadband. It has failed to deliver that for two reasons. Not every new build project is in the right place for Openreach to roll-out superfast broadband. Even where they are, not every home builder does a deal with Openreach or its major competitor Virgin Media.

Many technologies have matured rapidly over the last year. Video and desktop conferencing, collaboration tools and cloud-based solutions are just three. All of these have crammed five years of development into a single year. The challenge for organisations is how to bring these into their business effectively.

According to Fields: “Technology allows us to take control of our working lives in a way we’ve never been able to before. Thankfully, those wishing to spend more time working remotely are no longer burdened by outdated cultures and stigmas.

Whether you’re working from home, a collaborative working space or a coffee shop, with the right technology, employees can benefit from the same secure digital workspace they would traditionally have experienced in the office, remaining productive and engaged, wherever they are logged on.”

The office is not dead yet

It would be easy to see remote working as the norm for the majority of people going forward. However, there are good reasons for offices to survive. For some companies, creating out of town drop-in centres as a hybrid remote/office solution is the future. For others, especially in financial services, the office is still king.

Cities are also moving to support a return to the office. The loss of rents and rates will strip many cities of their spending abilities. What will replace it to prevent cities sliding into decline? Deutsche Bank Research has proposed a 5% work-from-home tax to make up for lost revenue. A UK employee on £35k would pay £7 per day that they worked from home. For those looking at a pay cut to WFH, it is a proposal that would hit them hard.

Is that enough to change people’s minds? The survey didn’t explore that option, something Citrix might want to factor into any future survey. A straw poll of 10 people by Enterprise Times saw all reject any idea of a pay cut if they were taxed more.

Many people also miss the office. The socialising, structure, and ability to get trained to be promoted are all reasons people would go back to the office. There are also healthcare issues, especially around mental health. For the same reason mental health for children has been used to open schools the same can be said for adults. Importantly, businesses are responsible for employees’ health, and many could see reopening the office as part of that.

This is another study looking at the future of remote work and some of the unexpected side effects. The problem is that while this is all being discussed during the pandemic, people are willing to do anything to avoid the office. The stress of travelling on trains, the risks of catching COVID-19 from strangers and work colleagues all colour people’s thinking at present.

What is more important is that we move away from quantitative surveys with limited analysis and start looking at qualitative studies. These take longer but can yield more valid results.

One this is certain, however. Any pay cuts have to be carefully weighed up to ensure they don’t come with unexpected and nasty surprises.