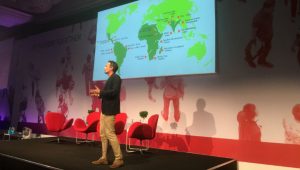 Richard Reed closed the keynote at the Oracle NetSuite’s SuiteConnect event in London. Starting from a market stall, Reed set up Innocent Drinks with two friends. A smoothie and drinks company that now produces more than a million smoothies a day and sells in 17 countries across Europe.

Innocent Drinks started life in 1999, after selling smoothies at a music festival. Reed and friends put up a big sign asking people if they thought they should give up their jobs to make smoothies, and put a bin saying ‘Yes’ and a bin saying ‘No” in front of the stall. People voted with their empties. At the end of the weekend, the ‘Yes’ bin was full, so they resigned from their jobs the next day and got cracking.

Innocent Drinks was sold to Coca-Cola in 2013. Reed is also co-founder of JamJar Investments, an early investor in Deliveroo (coincidentally an Oracle NetSuite customer.)

Reed shared his journey at Innocent Drinks in an entertaining and interesting presentation. He discussed the company’s ethics and business culture.

The eight things Reed found to be true:

Reed’s presentation provided an honest and invaluable insight of Innocent’s evolvement from start up to major international entity. He provided plenty of food for thought of the tangible and intangible ingredients, that helped ensure business success.