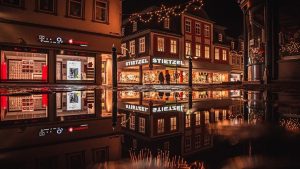 Black Friday / Cyber Monday is one of the highest-volume shopping moments of the year. A time when Shopify celebrates the power of entrepreneurship on a global stage. Shopify saw deals start earlier this year as brands and shoppers got ahead of shipping and supply chain delays. Daily total sales increasing 28 days before Cyber Monday versus 19 days in 2020.

For the second year in a row, Shopify is fighting climate change during Black Friday / Cyber Monday. The company says it purchased enough carbon removal to completely eliminate the impact of carbon emissions from shipping on every single order on its platform over the shopping weekend. This amounts to nearly 60,000 tonnes of carbon emissions offset. Shopify says it carefully chose four high-quality carbon removal technologies and solutions.

Black Friday saw the highest shopping volume during the weekend. Peak sales of more than $3.1 million per minute at 12:02 PM EST on November 26. 47 million consumers globally purchased from independent and direct-to-consumer brands powered by Shopify.

Shoppers’ spend climbed across many countries. Consumers globally spent $100.70 per order on average throughout the Black Friday / Cyber Monday weekend. Consumers in Canada spent ($115.14 CAD), Australia ($158.80 AUD), and US ($96.60 USD) spending the most on average.

The top-selling cities shoppers made purchases from over the shopping weekend were London, New York, and Los Angeles.While the US, UK and Canada were among the top-selling countries worldwide.

Globally, 71% of Black Friday / Cyber Monday sales were made on mobile devices compared to 29% on desktop.

Apparel and accessories sales reigned supreme across Shopify-supported stores globally this weekend in Germany, Italy, and Black Friday / Cyber Monday continues to be a worldwide phenomenon with cross-border sales. It represents 15% of all orders globally, with the most popular cross-border routes being US-Canada, Canada-US, and United Kingdom-US.

Shopify’s 2021 Black Friday / Cyber Monday data is based on sales by its more than 1.7 million businesses in approximately 175 countries around the world from November 25th 11:00 UTC to November 30th 08:00 UTC.

Shopify is reaping the rewards of its investments in its global infrastructure over the last year. Earlier in the year, Shopify expanded its integrated retail hardware for Shopify POS. In addition to Shopify Payments for in-person transactions to retail merchants in Germany.  The company also launched Shop Pay Installments, its buy now, pay later product in the US. The service is specifically designed for Shopify merchants. The company is looking to roll the service in other markets.

The company also partnered with the Canadian government last year to support its ‘Go Digital Canada’. A campaign to support small businesses migrate online and adapt to the digital economy. So, its not too surprising that the company had record global sales during this Black Friday and Cyber Monday weekend.