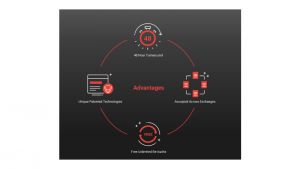 Daryl Hok, CertiK’s COO: “CertiK is proud to become the first audit partner of LTO Network on their road to global adoption with their Live Contract solution. Just like smart contracts, it is crucial for Live Contracts that these contracts only perform as they are precisely intended, and we’re glad that CertiK can deliver an extra layer of assurance for clients that want to use this novel technology.

“LTO Network stands for a new wave of transparency in the blockchain landscape that completely aligns with the values we have at CertiK, making it a great and promising partnership.“

Live Contracts’ mini private blockchains facilitate the efficient, decentralised streamlining of day-to-day business processes for efficient data exchange between stakeholders in a unique GDPR compliant way. But self-executing smart contracts on a blockchain, which are fully automated and irreversible, need thorough checking (auditing) before they can act.

The fear must exist that an error – even just a typo – contained within a smart contract’s code may have far-reaching (including financial) consequences. For this reason, and especially for high-risk smart contracts, common sense says there should be audits by experts before setting these Live Contracts ‘in motion’.

CertiK will be delivering its smart contract audit services to LTO Network users. Its objective is to prevent critical attack vectors and vulnerabilities in Live Contracts.

Rick Schmitz, CEO of LTO Network: “Having experience in doing business with crypto’s giants, we believe CertiK is the ideal audit partner for LTO Network. We’re proud of the vote of confidence in the solution by CertiK that they will be using the solution for their own operations, next to auditing Live Contracts as a partner.

“This partnership is a big step towards the adoption of our technology and we look forward to demonstrating the audited plug-and-play templates to businesses and governments all over the world.”

CertiK will use the LTO Network global public blockchain to anchor its Proof-of-Existence on their smart contract audit reports. Furthermore, CertiK will audit plug-and-play and custom Live Contract templates. This will enable client enterprises to:

The origin of the Certik/LTO Network lies in their combination at the 2019 New York Area Global Legal Hackathon (New York area). The joint team won a prize in the competition (there 3 winners out of almost 30 teams competing). At the Hackathon, the team members came from:

All collaborated on a ‘Contract App’ – a  mobile-based application which enabled representatives to negotiate B2B contracts based on their companies’ positions or IACCM’s reasonable positions. Furthermore, by using AI, third party papers could be uploaded and analyzed, thereby re-using the data in a contract in a new agreement.

After the conclusion and signing of an agreement (via DocuSign), the LTO Network blockchain places an instant ‘Proof-of-Existence’ on the agreement. It is this which a third party can independently verify on the ‘Contract App’s’ website.

With every legal clause in a contract possessing its own, predefined execution path, Live Contracts is able to automate execution. In turn this creates the immutable audit trail of the process events.

About CertiK and the LTO Network

CertiK has as its mission the raising of awareness about cybersecurity. CertiK has financial backing from:

In contrast, LTO Network is a blockchain toolkit for creating trustless workflows while maintaining data privacy and GDPR compliance. Developers and enterprises can use the LTO toolkit to:

Those seeking immediate contract audits from CertiK will have to wait. The official release of the Contract App will be later this year.

But, as with conventional financial auditing, not all elements of all smart contracts will pass muster. This suggests that there will be some spectacular, and expensive, mishaps – with remedial measures following – before smart contracts achieve general acceptance.