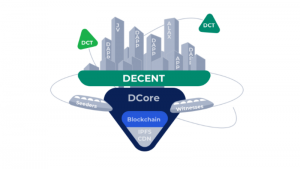 DECENT is partnering with Fiction Riot and its Ficto platform to pay royalties via a blockchain. They have designed the resulting ‘smart contracts’ to deliver transparency of payments in US$ to all parties involved in the production of streaming content featured on Ficto, on par with industry standard studio rates.

Fiction Riot is a pioneer in the production and streaming of user-engaged video. Its Ficto platform will run on DECENT’s proprietary blockchain platform, DCore which has a throughput of some 2,000 tps (transactions per second).

“Streaming media services predominately pay a single upfront fee for the right to stream an existing or original film property, which essentially cuts the artists out of royalties on content that generates heavier viewership,” explains Mike Esola, CEO and Co-Founder of Fiction Riot. “Whether for economic or technological challenges, this quickly became the norm. Now that blockchain is much more pervasive and mature, we saw an opportunity to course-correct this practice with trusted, automated smart contracts that take the mystery out of artist compensation for streaming media – ensuring payment is on par with the amount of viewers they attract.”

Through its use of smart contracts, Fiction Riot seeks to address broader entertainment industry challenges related to compensation. By recording transactions on the blockchain, Ficto can pay:

Because participants agree the reward formula upfront, everyone involved in production receives payment in a timely manner. This is not the entertainment industry norm, and Ficto believes it:

Ficto enables an engaged user experience for its serialized fast fiction by leveraging native mobile features. These include:

The Ficto platform uses proprietary technology which allows Hollywood content creators to combine, via a ‘toolbox approach’, video assets with mobile-first applications. Fiction Riot says this will become available to consumers in the Spring of 2019. Currently it has twenty series in production, representing a balance of original and licensed content. As availability draws closer, Fiction Riot is looking for additional content creators which it hopes will secure and develop its second round of funding.

DCore is a blockchain tailored for the entertainment industry. Its objective is to enable artists to:

Through openness and transparency based on consumer viewing and the corresponding payments, DCore delivers secure, robust real-time data. This means creators can:

DECENT”s mission with DCore is to make blockchain technology for data and file transactions accessible and useful for real-world applications. The versatility of DCore allows companies to fast track cutting edge blockchain solutions tailored to specific business needs, including for large files (which matters for Fiction Riot).

DCore uses a DPoS consensus algorithm and integrated IPFS to perform fast and efficient data transactions while ensuring the highest possible level of security via blockchain protocols. Most transactions complete within 5 secs.

To support these, DCore has built-in features which act as building blocks for enabling blockchain-backed functionality. These can be customized and combined to build blockchain solutions and applications for businesses and small projects alike and include custom tokens (assets created by account managers on the DCore blockchain).

“Fiction Riot’s bold move to embrace blockchain is ushering in a new compensation model for streaming media, bringing a fresh vision to the entertainment industry,” said Matej Michalko, Founder and CEO of DECENT. “We’re excited to apply the security and efficiency of our DCore platform, removing traditional complications associated with payments, making them more transparent and trusted in Hollywood.”

DECENT is Swiss-based non-profit foundation which has developed DCore as an open-source blockchain platform. Cooperating with investment funds and incubators, DECENT is building an ecosystem on its proprietary blockchain technology. An example of a different use of Decent technology comes from the aviation supply chain world with 3IPK.

In contrast Fiction Riot (from Los Angeles) is a technology and content startup. Through the Ficto subscription platform it employs engineers, Hollywood artists and household-named talent to produce user-engaged streaming video format designed specifically for mobile devices. For content creators, Ficto wishes to be an intuitive platform with built in tools for these people to create great stories for the mobile viewer.

Looking out more broadly, this combination of DECENT’s DCore and Fiction Riot’s Ficto presents an alternative business model with much needed transparency for artist payments and royalties, which can also apply to entire production teams. It many ways, if successful, it will disrupt traditional Hollywood reward models for original and licensed content – as well as offer swifter audience/artist feedback about content.