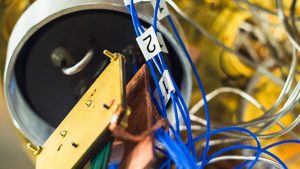 IBM has announced another set of milestones for its quantum computing project. It has announced two processor upgrades. The first will give customers using the IBM Q early-access commercial system access to a 20 Qubit processor. This is an upgrade from the 17 Qubit solution announced in May. Customers will get access by the end of 2017.

The second announcement is the big one. IBM has been talking about a commercial 50 Qubit solution by 2020. It has now built and measured its first 50 Qubit system. This gives it over 2 years to stabilise and commercialise that solution. It is possible that it could enter production up to a year ahead of schedule. To put this into perspective, it is believed that a 50 Qubit system would deliver more performance than any supercomputer built and even planned in the same timeframe.

The announcement comes a month after Intel announced it had delivered a 17 Qubit chip for testing. It also follows on from a decision by Intel to invest $50 into quantum computing research. With Intel seemingly so late into the game, it appears to give IBM a significant lead and one that it is unlikely to relinquish.

According to Dario Gil, vice president of AI and IBM Q, IBM Research: “We are, and always have been, focused on building technology with the potential to create value for our clients and the world. The ability to reliably operate several working quantum systems and putting them online was not possible just a few years ago.

“Now, we can scale IBM processors up to 50 qubits due to tremendous feats of science and engineering. These latest advances show that we are quickly making quantum systems and tools available that could offer an advantage for tackling problems outside the realm of classical machines.”

Quantum Computing beginning to take off

This is not just about theoretical computing. IBM has allowed customers and partners access to its IBM Q Experience programme for over two years. It has seen over 60,000 users run more than 1.7M quantum experiments. As well as commercial partners, IBM has attracted a lot of educational institutions. There are now more than 1,500 universities and 300 high schools using the IBM Q Experience.

Of more interest is the 300 private institutions that are using the platform. Many of these are working on business issues and looking at the potential for quantum computing. To help both educational and business customers, IBM has also released a number of developer tools. These are designed to help developers adapt their code for quantum computing in order to get the best from the platform. It will be interesting to see if these tools, such as the open source QISKit will also run on other quantum computer processors such as Intel.

So far, none of the commercial companies that are using the IBM Q platform have announced new business solutions. This is not really a surprise. The gap between having a technology, understanding a technology and getting it to deliver new solutions can often be years. This is one of the reasons for the IBM Q Experience. It allows people to experiment and gain experience while the technology matures.

IBM is making its quantum computing solution available through its cloud model. This comes as no surprise. The cost of a private quantum computer is likely to be out of the reach of all bar governments and potentially a few multi-nationals. Even then, the resources required to run and maintain such a computer are likely to be exorbitant, at least in the short term.

What will be interesting is how quickly IBM reinvents its own business software to sit on its quantum computer. When will we see IBM Db2Q or Watson Q? The arrival of these products will mark a watershed in the IBM quantum computing story. In the case of Db2, it is more likely that IBM will create a whole new database architecture that is tuned for quantum computing.

Watson, on the other hand, is a far more interesting proposition. Machine learning and AI require a lot of compute power to constantly assess and evaluate data. The more they can consume and analyse the better the solution. Quantum computing would seem to be one of the missing technologies for creating the real-time AI beloved of science-fiction writers.

Encryption is another field where quantum computing will have a significant impact. IBM has already invested heavily in hardware encryption solutions for its IBM Z mainframes. How long before we see an IBM quantum computing add-on to improve encryption? Given the depth of customers IBM has in the financial, government, pharmaceutical and other research sectors, this cannot be far off. In fact, it would be a surprise if we didn’t see IBM bring its IBM Q and IBM Z cloud offerings together inside its SoftLayer cloud data centres.

This is more than just another jump down the research line for quantum computing. The number of experiments being run by education and commercial customers is increasing. IBM has invested heavily in quantum computing and the benefits are beginning to show. It has a lead over Intel that will be hard to close and there is no other player in the quantum computing market as close to a 50 Qubit solution as IBM.

The big question is about the commercial solutions. At present there are software development kits but IBM has not yet ported any of its own solutions to this technology. Once it does this and begins to offer access to those solutions on commercial cloud computing terms, companies will see this as a valid technology.