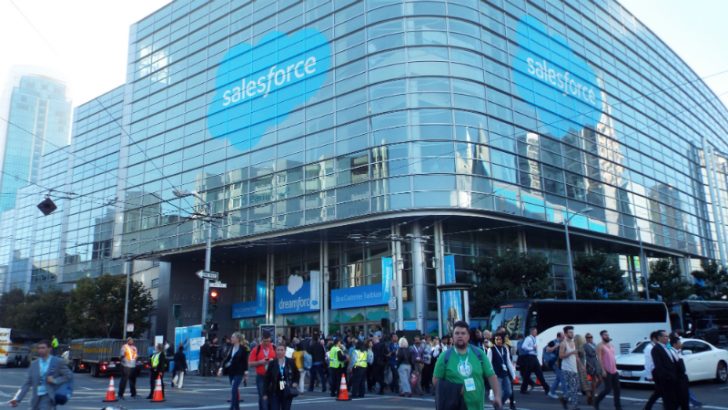 The Wall Street Journal (subscription required) has published an article listing the 14 companies Salesforce was looking to buy in May 2016. The list is based on emails from and to board member Gen Colin Powell. Those emails were published by DCLeaks. This is a site dedicated to leaking the emails of “top ranking officials and their influence agents around the world.”

Salesforce was outbid by Microsoft for LinkedIn who paid 50% more than Salesforce thought it was worth. This leaves the remaining serious targets as ServiceNow codenamed “Sonoma” and Tableau codenamed “Tuscany”.

Of the two analytics companies listed Tableau remains as a possible target. Qlik went into the private equity ownership of Thoma Bravo LLV in June for around $3 billion. This was slightly more than the Salesforce “enterprise valuation” of around $2.5 billion. The 50% drop in the Tableau share price in February may have been one reason for their inclusion. Their shares have since recovered to $47.23 from a low of $37.22 and their market cap is now $3.49 billion. It is unlikely that Salesforce will pursue them as the Salesforce Wave analytics products are launching onto the market.

Three Marketing automation software companies are listed, Adobe, Marketo and Hubspot. It is unlikely that Salesforce can afford Adobe, who were also listed as a potential competitor for acquisition targets. Marketo has seen its shares slide recently were purchased by  Vista Equity Partners for $1.79 billion in June. This leaves Hubspot whose share price rise May means its market cap is now $1.79 billion. The company develops and markets a software product for inbound marketing.  Hubspot is not in a position that they need to sell and with a growing share price they may hold out for a higher offer.

Salesforce also looked at two cloud service management solutions ServiceNow and Zendesk. Both are still available for Salesforce to purchase but integrating them into the Salesforce Service Cloud would take time. ServiceNow are the larger of the two companies and is the most likely acquisition target. This is because Salesforce were clearly rebuffed by CEO and Founder Mikkel Svane  of Zendesk.

With Quip acquired it seems unlikely that Salesforce will pursue the acquisition of Box. Box CEO Aaron Levie had already publicly stated he was not interested in a deal. This is almost certainly why Benioff turned to Quip as an alternate and possible stronger fit. Quip fits what seems to be a long term strategy of Salesforce to take over the entire software solution for companies. While Box would have provided a limited collaboration piece it would not have given Salesforce the potential that Quip offers.

Walking around Dreamforce it is clear that there are few ERP solutions actually sitting on the Salesforce platform. The biggest one is FinancialForce. Although they have a professional services solution it seems that Salesforce is frustrated by their lack of international growth. This is something they are looking to change over the next few months as they look to expand into Europe. So what can Salesforce do? The list says that in May they were looking at four ERP targets. Interestingly they highlight the Professional Services Automation percentage for some of these.

Another ERP for Salesforce?

Veeva Systems focuses on the pharmaceutical and life sciences industries. It is complementary to FinancialForce and would give Salesforce a foothold in a significant and growing market.

NetSuite is a surprising inclusion and would have required Ellison’s blessing to go ahead. There is another angle to this news. Oracle is now aware of Salesforce placing an “Enterprise Value” of less than $7 million against NetSuite. This could enable them to argue that T Rowe Price is attempting to over value NetSuite making the original offer  generous. Is Benioff helping Ellison? It’s unlikely but it certainly adds another dimension to the acquisition story of the year.

Workday is also on the list. As with NetSuite any deal would need to be in agreement with the founders due to the unique share split in the company. Workday has a note saying “less interested” against their entry. Salesforce currently partners effectively with Workday in larger accounts and they sometimes bid jointly against Oracle.

This leaves Pegasystems. They are as much a competitor as an acquisition target. There is the potential to gain functionality from them but it could be cheaper to build that rather than buy it. One would question the decision to buy them other to gain a larger market share. What would happen to their existing software and customer base is a big question.

The leaks say little about what Salesforce will do next. It does provide an idea of where Benioff wishes to strengthen the company. Salesforce continues to acquire companies regularly but has focused on smaller niche companies since the larger Demandware and Quip acquisitions. Hubspot or another inbound marketing company may well happen. The most interesting proposition however may be another company not on the list, FinancialForce. Already part owned by Salesforce ventures they would need to talk to Unit4 about acquiring the remaining portion.

The question is whether Salesforce can grow their presence in the professional services market. Acquiring FinancialForce is a good choice. Salesforce can help to accelerate the development work on the ERP solution. With a strong finance package at its core can look to leverage it in any direction it wishes.

“Salesforce has a disciplined and thoughtful M&A process where we routinely survey the industry landscape across a wide range of companies, but acquire very few. The presentation is a broad survey of publicly traded companies in May 2016, and the appearance of company names on the list doesn’t imply Salesforce ever intended to acquire them.”