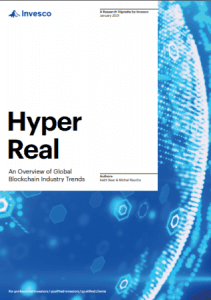 Invesco has published a report, undertaken by Keith Bear and Michel Rauchs (Fellow and Research Affiliate respectively at Cambridge Judge Business School’s Centre for Alternative Finance). This shows that the blockchain industry has evolved at a remarkable pace over the past 18 months. In so doing it suggests there are opportunities for investors.

Chris Mellor, Head of EMEA ETF Equity and Commodity Product Management at Invesco said: “The challenge facing any investor who wants to gain exposure to the blockchain theme is how to do it effectively. There’s not a ‘blockchain sector’ in which to invest. Instead, companies generating revenues from the technology – or with the potential to do so – are spread across multiple industries and range from start-ups to huge conglomerates. They are often not obvious. We launched the Invesco Elwood Global Blockchain UCITS ETF to provide investors with diversified exposure to an index constructed by experts in digital assets.”

According to the authors, organisations have begun commercialising enterprise blockchain networks across multiple sectors. These include:

In many of these cases, they argue, application has now achieved scale. For example, a number of new permissionless blockchain networks have recently launched to address enterprise applications. In addition, there is increasing cross-over between permissionless and permissioned tracks. The Ethereum network, for instance, has established itself as a market leader for smart contract applications – thanks to:

Keith Bear, Fellow at Cambridge Judge Business School’s Centre for Alternative Finance said: “The crescendo of activity on central bank digital currency, stablecoins and tokenised assets points to major new means of facilitating trade, payments and investments in the evolving digital economy. What has largely been a retail-driven market is now becoming more institutional, as ‘unicorns’ and start-ups, brokerages, custodians, institutional trading platforms and global banks build a range of digital asset products and services. Decentralised and enterprise blockchain applications are also on the rise, supported by the growth of extensive software libraries and developer tooling.”

The report, entitled Hyper Real: An Overview of Global Blockchain Industry Trends, looks in detail at industry developments as well as at key trends potentially shaping blockchain’s long-term trajectory. Among those described are:

In terms of looking ahead at what will be key market developments in 2021 and beyond, the report forecasts that M&A activity in the sector will accelerate. Activity picked up in 2020, with further consolidation expected primarily in the exchange and custody segments. Acquisitions by Broadridge and ConsenSys suggest a similar trajectory in the enterprise blockchain market segment.

First, some perspective. there is a reason that Invesco commissioned this report. The Invesco Elwood Global Blockchain UCITS ETF launched in March 2019. It, Invesco, says now has US$417M of assets under management (as of the end of 2020). Again, according to Invesco, this ETF returned over 90% in 2020 and over 120% since its inception.

With this ‘self-interest’ dimension understood, the Invesco/Judge report has value because it examines how, after years of taking the centre stage, blockchain is likely, and increasingly, to hide behind the scenes (arguably where any ledger technology should be). The focus is shifting to user experience and commercial considerations. Blockchain components will quietly integrate into traditional enterprise IT stacks. This should abstract away underlying complexities from end users – who will then be unaware of what is going on in the back end.

What is less clear, at least to Enterprise Times, is why this will benefit the fund. Unless it is that volume enterprise purchases expand the more that blockchain can hide.