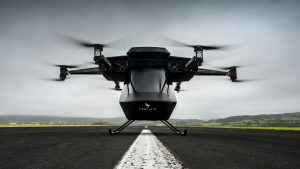 Vertical Aerospace is a leading innovator in the electrical aerospace market. It launched its second full-scale all-electric vertical take-off and landing (eVTOL) prototype in 2019, the Seraph. It is capable of carrying 250 kilograms of load.

The company is now looking to build its first commercial model. It is the first eVTOL granted flying permission by the Civil Aviation Authority (CAA). Founded in 2016 the startup looked to deploy cloud-based applications enabling it to focus on its product rather than IT systems. In the first instance, it chose Sage Live ( Sage Financials) on the Salesforce platform. However, with that solution going end of life, it needed to find and implement an alternate solution.

Its requirements had also evolved. Rather than just a finance-based solution, it needed an ERP that could manage the inventory and supply chain requirements as it scaled up the organisation. The Seraph has nearly 500 individual different components. It was using Excel to track parts and purchase orders. Using PowerApps for automated requisitions was not a scalable process.

Time was also of the essence with production increasing and development within Sage Financials pointless. Steven Baxter, Head of Programmes at Vertical Aerospace, explains the urgency: “We aim to have a certified aircraft that will sell in 2024. Our initial component releases are to support prototype aircraft that we aim to fly in 2021.”

By that time it needs a full track a trace solution in place. After a lengthy selection process, it chose to deploy Rootstock ERP. It deployed the solution in just three and a half months. Impressively it completed the final stages of the project during the COVID-19 without any impact.

Baxter only joined Vertical Aerospace in March 2019 from Mercedes GP team. He took up the story saying: “I immediately saw a need for an ERP. At the time, the company didn’t have one and was using Excel to track orders, but this wouldn’t provide a comprehensive view of what was going on in the company. Being in aerospace, we also needed full traceability of our products and components.”

The selection process took six months. The team looked at several applications including Microsoft Dynamics, QAD, Infor, Epicor and Global Shop Solutions. Oracle and SAP ERP were also considered, but Baxter noted that “these, however, were too cost-prohibitive”. Baxter explained the thinking behind the final selection. He commented: “We didn’t want an older system that had been around for a while. We wanted a newer, more innovative solution. During our investigation, we came across Rootstock. Its ERP was exactly what we wanted –modern and dynamic. It met our requirements and was a one-stop shop, capable of handling production, purchasing and finance – all from one cloud rather than multiple platforms.”

ET asked Baxter why they choose Rootstock over the others and whether being on the Salesforce platform played a part?

“We selected Rootstock on its own merit as we knew it was agile and supported our aerospace business. After further analysis, we saw the benefit of the SalesForce platform, which gave us more opportunities in the future.”

Implementation started in January 2020. The plan was to begin releasing aircraft component by the completion date of April 2020. A two-day meeting to scope the project and create an outline of what was required was held. At the end of January, the roadmap was in place. By February the system was available. In March system testing started, then the lockdown commenced.

Baxter explained what happened next: “An on-premise implementation would have stalled. All of our team members were working remotely and spread throughout the UK. But because we were implementing a cloud-based system, we were able to complete testing and training remotely successfully. With Rootstock’s team supporting and advising us each step of the way, we went live in just three and a half months – and during a worldwide pandemic.”

ET asked Baxter what the most significant challenge during the project was. “Luckily we had captured all of our requirements before lockdown. Therefore the biggest challenge we had was executing our system testing. We had around ten people working remotely, as well as being supported by people in Sweden and other European countries from Rootstock. Via the use of Teams and phone calls, this was all overcome and completed successfully.”

A live System and what next?

This first phase of the project saw Vertical Aerospace deploy solutions to manage its supply chain, purchasing, inventory, delivery, costs and operations. Baxter then explained how it is to continue developing the solution:

“The next phase is to implement a more robust finance package. Once the production and selling phase begins, Rootstock will become our main platform for generating CRM sales orders.”

That robust finance package is the Rootstock Finance module which will presumably replace Sage Financials shortly.

Baxter is confident for the future adding: “We believe in Rootstock’s ability to grow with our company as it supports and facilitates our need for agility – whether it’s complying with industry regulations, dynamically dealing with aircraft designs, or seamlessly extending capabilities through other applications. Rootstock gives us opportunities on a broader scale.”

ET also asked whether there were other third-party integrations. Baxter replied “At present, nothing. However, there are plans to integrate it with our CAD system, and we’re also looking into other opportunities within the SalesForce platform.”

That CAD solution is Catia 3Dexperience from Dassault Systems. Baxter is hoping that Catia will have an API available in the coming months for ERP. It is likely, Catia 3DX already integrates to SAP and Infor. After the Dassault Systems acquisition of IQMS in 2018, it is strengthening its integrations to ERP solutions. Surprisingly, Vertical Aerospace did not name IQMS as one of the ERP solutions it considered. The latest version of 3DExperience did not include IQMS ERP. Perhaps when that happens, a more generic ERP API will become available.

Once integrated, Baxter hopes to extract detail from the Catia 3DX solution straight into Rootstock. It eliminates data entry and provides an accurate bill of materials for assemblies and sub-assemblies for the ERP.

In time Baxter will also implement the Salesforce CRM. He noted: “Once the production and selling phase begins, Rootstock will become our main platform for generating CRM sales orders. This is expected to be implemented within the next two years.”

Vertical Aerospace now has complete visibility into its entire product structure. It includes supply chain, purchasing, inventory, delivery, costs and operations. ET asked Baxter whether the company was able to measure any KPI’s yet.

Baxter answered: “At the moment we don’t have any KPI’s because we are not fully utilising Rootstock while in lockdown. We are not releasing any parts for manufacture at the moment as we are currently in the design phase of our next aircraft. However, we will definitely see massive improvements over our historic systems for tracking financials, orders, suppliers etc.”

In selecting Rootstock, Baxter seems to have a future-proofed ERP. It delivers what the company needs now. Underpinned by Salesforce, the company can also adapt the solution to meet any specific requirements. Importantly it can leverage Salesforce applications such as Sales Cloud, Service Cloud and Marketing Cloud as needed. It can also add other integrated apps from the AppExchange.

Enterprise Times: What Does this mean

Vertical Aerospace has chosen carefully and successfully implemented this solution in a short time. Was there anything Baxter would recommend others do? He replied: “I would highly suggest that all your requirements are defined, and you ensure that you fully test the system prior to going live.”

This is an important win for Rootstock in the UK, at a company that is on the verge of becoming a major player in aerospace. Pat Garrehy, CEO of Rootstock Software, said: “Vertical Aerospace is a leading electric aircraft company, and we are thrilled to be able to work with a company of its calibre. Vertical Aerospace is pioneering a new stage of aviation and building technology to revolutionise how people fly. The company has achieved so much since its inception, harnessing the pace and agility from Formula 1. Now, using our ERP, it has expanded the power of the cloud to all areas of its business, extending its collaborative work environment during the COVID-19 shutdown.”

Where Vertical Aerospace appears to have found its perfect ERP, Rootstock may just have gained its marque UK customer.