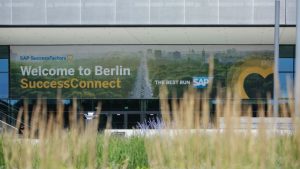 No not that CRM. SAP as part of their renaming of acronyms (it started at Sapphire apparently) have launched Candidate Relationship Management for SAP SuccessFactors.

The announcement came on the first full day of SuccessFactors Connect. This year it is being held in the CityCube in Berlin, Germany. It was the only significant product announcement. On stage there was also a demonstration of the SuccessFactors Android App that will become available in September.

Jeff Mills, Director, Solutions Management/Marketing at SAP explained that the product was launched to help customers meeting the challenge of low unemployment and an increasing difficulty in attracting new talent. Mills added: “There are more job openings in US than jobs right now, the ability to find people is getting harder.”

He did acknowledge that this issue is cyclical. However, this feature set is not something created on a whim but has been a while in coming. SuccessFactors had the concept in the recruitment marketing functionality they developed. However, after receiving feedback on that functionality it decided to take a more “holistic” route.

This is not a standalone feature but part of the recruiting functionality. It will be released incrementally and by 2019 SuccessFactors believe that the initial phase will be complete. It will then stand up against competitors with similar functionality today. According to Mills initial functionality is: “Focused on recruiter experience,  eg talent pooling, created talent pools, also consolidated candidate profile. Every kind of data, activities and actions eg emails.”

It also includes landing pages and data capture forms. These are similar to marketing automation such as Marketo. The aim is to capture a small amount of data with every interaction rather than present a huge data capture form early on. This allows SuccessFactors to build a deep knowledge base on candidates. In the third quarter, releases will contain email campaigns and their delivery mechanisms.

Tim Adair, Director, Product Management at SAP acknowledges that this is not the finished product. Eatly adopters are positive though. Mills added: “This is one of the reasons we took it on? There is a very strong need from the customer base to have these functionalities. We expect adoption to increase. The features went into production two weeks ago, (there are) close to 70 customers in early adopter program and many more turned it on but are not part of early adopter program.”

Customers, if they haven’t already implemented, are looking forward to the increasing functionality of CRM. Miodrag Perin, senior director, Corporate HR Strategy & Systems, Bertelsmann SE & Co. KGaA commented:. “I look forward to the candidate relationship management capabilities continuing to develop into a world-class relationship management platform that will strengthen our candidate communications capabilities, while allowing us to celebrate our branding and media assets in the process. Candidate relationship management takes recruiting safely to the next level and brings everybody along for the ride in a simple interface that is naturally embedded in the recruiting software and workflows.”

What about that mobile app?

After the success of the iOS app SAP SuccessFactors has now developed an Android application. This will go into general release in the autumn. It is not an exact match to the iOS version as it has taken advantage of the design features of the Android OS. Thus when an employee details are displayed, it is possibly to click on the email and phone number to send an email via gmail or dial the individual. With nearly half the audience at SuccessFactors Connect using Android devices this is an app that was welcomed by many.

Coming so soon after Sapphire there was little in the way of product news at the event. However the CRM functionality is timely as it addresses what many feel is an increasing problem. In building the new functionality into the core HCM system, HR users do not need to invest in separate solutions. Amy Wilson, global head, Product, SAP SuccessFactors commented: “Built on the SAP vision that employees should be a company’s top priority, our new candidate relationship management capabilities help ensure that candidates and recruiters have an exceptional experience from the very first interaction. By delivering experiences that are engaging for both recruiters and candidates, our customers can get a leg up on competition and make a lasting impression on top talent and future leaders.”

What is clear at the event is that SuccessFactors is to an extent become more closely aligned with SAP. The customer base, at least cloud customers, will have completed the migration to SAP HANA by the end of the year. With only 1% on Hana last October, this is a significant achievement.

Mills acknowledges that the CRM team utilised some expert advice from the wider corporate developers. However, there is no common code between Customer Relationship Management with S4/HANA or SuccessFactors Candidate Relationship Management. This is surprising and creates an overhead in the future. At some point functionality across platforms should become the norm. SAP has started that process though with a project to create a common core data set, of which SuccessFactors is providing the common core for employees.

SAP Innovation on the Move takes blockchain (and more) to Eastern...