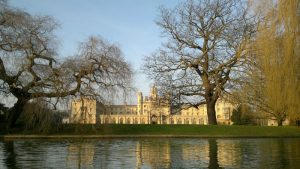 Stephen Hoensch is Head of Frontline Services at Cambridge University. He is responsible for introducing and extending the University’s core services beyond its fibre network which criss-crosses the city to support students, colleges, academic faculties and their permanent staff plus administration.

Those working on the fibre backbone network celebrated its 25th anniversary last year. Originally introduced to provide a high-speed network to connect institutional workstations with central administered mainframes, the importance of data has grown and grown. Because the University introduced fibre across the city it now finds itself in a position to extend, improve and manage a portfolio of broader data services for its diverse user population.

The University is over 800 years old. It possesses multiple traditions, many of which compete or complicate. For example, some 6,000 new under/post graduates arrive each October and approximately the same number leave, as graduates, each June. This means the University must add and remove some 18,000 people each year, in two one-month activity bursts.

Once you include academic and administrative staff, the university manages some 65,000 individual accounts. Associated with each are a myriad of different privileges and access rights.

To add to this, there has always existed a tension between those receiving tuition, those giving it, the Colleges, the academic faculties and central administration. For example, most colleges have built upon the University’s core network but have organised their own internal college networks and IT infrastructure. Yet a college’s students need to study outside their college in the relevant academic faculty. Similarly, many academic members invest in their own micro-facilities, for example local NAS storage for storing and backing up their research. All this creates complexity, duplications and risks.

As Stephen Hoensch puts it: ”The University, by necessity, is full of highly intelligent people. These people need basic IT that just works so they can continue to work on the next breakthrough or Nobel prize. Removing duplication and unnecessary IT activity, though only with participants’ agreement, will improve the University’s ability to stay productive and innovative.”

Building on the core capability

The Cambridge University Data Network (CUDN) represents a core capability. It connects everything, with even the Cambridge City Council participating by installing wireless from lamp posts and other street furniture. Better still, users recognise the CUDN as proven and reliable, not least with its connections to the UK’s broader academic JANET network.

This acceptance is crucial. The CUDN supplies an accepted core competence and capability on which to build. In the future, for example, the University hopes to facilitate or implement:

The University will introduce the above as core services. Once accepted by the admin core, the centre will invite colleges, academic faculties and other users to join, not by coercion but by example. Over time the hope is that the efficiencies achievable will appeal more than the overhead of running small facilities.

Within all this comes the need to move from two separate and very different systems which handle ‘transient’ student credentials and those for permanent staff. As Mr Hoensch describes, “merging and updating these is challenging, not least because one system is open source-based but no longer capable of accepting modern patches while the other is more conventional, rigid – based around traditional database technology”.

The University has introduced Ivanti’s Service Manager. This is the cloud version. While there was some debate about the implications of not being ‘on-prem’ the advantages are typical cloud ones:

Once introduced, the next step will be to assess other Ivanti products. Possibilities include:

Hoensch said: “In this context it is likely we will collaborate with our counterparts at Oxford University. From initial discussions and previous collaborations, we believe there is a 90%+ commonality in function in what we each need for the future. Working together should provide better assessments of new technologies as we as better end results for both.”

Add the student and permanent staff populations of both Cambridge and Oxford Universities together and this is equivalent to a major enterprise, with well in excess of 120,000 users at any point in time. In the past IT delivery has been fragmented, with functions spread across colleges, faculties and administration. This looks set to change.

That said, without the established and proven CUDN – in which Cambridge University users already possess confidence (Oxford has an equivalent) – the probability of succeeding would be smaller. A core competence is a powerful base on which to build.

Equally, for the Cambridge University vision to arrive, appropriate management and security tools – like those becoming available from Ivanti – must be available. Unified IT may be an Ivanti mantra but that does not make it any less relevant to the likes of Cambridge University.