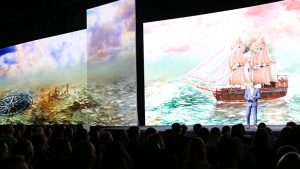 At Apttus Accelerate 2017, the Quote-to-Cash company was positively cool on the subject of blockchain. Come forward a year and it is a very different story. The company now has a whole team of developers based in India working on blockchain solutions.

Importantly, it has also chosen to work with IBM and use the IBM Blockchain. In reality this should come as little surprise given Apttus’ relationship with IBM and its use of other IBM technologies. This adoption of blockchain opens up several interesting possibilities for both organisations.

That’s an interesting question and one that Apttus CEO, Kirk Krappe is open about. A year ago the company didn’t really see where blockchain would fit. In that last year, however, blockchain projects around the supply chain have exploded. Projects that IBM has been involved in range from individual company supply chains through to international shopping solutions.

This has immediate potential for Apttus. One of its big clients is DSV who are a major competitor to Maersk. Maersk is looking to build an industry blockchain solution for global shipping. This is an extension of the work it has already done with IBM and will use the Hyperledger Project. One of the challenges of creating an industry wide blockchain solution will be interoperability across multiple permissioned blockchains.

For Apttus that is also likely to be a problem. While it can integrate blockchain into its own processes, its clients are unlikely to be working inside a single blockchain. It will hope to take advantage of the interledger work that Maersk and IBM are currently doing. It may also look to build its own interledger solution. That would be significant as it could then look at resolving the issue across several of the leading blockchain platforms.

One of the founding technologies for Apttus is contract lifecycle management (CLM). It has a long history in this area. It is in an interesting position, therefore, in that it can bring CLM to blockchain.

Smart contracts are becoming increasingly interesting. They are encoded into the blockchain when it is used to underpin commercial deals. The problem is that there is a significant lack of knowledge on how to create effective smart contracts which has led to a number of problems.

Max Proactive, the AI solution that Apttus has announced that sits alongside Apttus Omni, is designed to understand and create contracts. This opens the door for Apttus to expand that experience, along with CLM and begin to address smart contracts for enterprise blockchain solutions. When asked about this at Accelerate, Krappe refused to commit to this as a solution but did suggest that CLM had a lot to offer smart contracts.

Adding blockchain into Omni will be a smart move by Apttus. It is not there yet. However, it will play very much to its core market who are already looking at blockchain solutions for their supply chains. This will also strengthen its play in the middle office market. The ability to create smart contracts as part of its existing contract play will give it an advantage over its competitors.

IBM will also gain from this relationship. It has already committed to building an entire business practice around Apttus Omni and putting it on the IBM Cloud. With Apttus able to bring CLM and an AI driven contract creation engine, IBM will almost certainly want to add that to its product portfolio. It can distribute it as a microservice both inside Watson and on the IBM Blockchain platform.