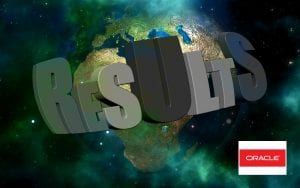 While Oracle may have hit revenue expectations, its earnings missed its target, according to Refinitiv. This briefly impacted the stock price, but it quickly rebounded. The reason given by Catz was, “Earnings per share was adversely affected by around $0.05 per share, primarily due to share price declines of equity investments impacted by the widespread downturn in equity markets last quarter.” (Source SeekinAlpha.com)

Looking forward, excluding the impact that the Cerner acquisition may have, Catz, expects growth of between 6-8%

Revenues from database support and cloud services also increased, up 4% over the last quarter. That will soon increase again. Oracle Chairman and CTO Larry Ellison revealed, “In Q3, Oracle completed development of the multi-cloud version of our MySQL HeatWave open-source database. The MySQL HeatWave database is already running in the Oracle Gen2 Cloud. In a few weeks, MySQL HeatWave will also be available in the Amazon Cloud and the Microsoft Azure Cloud.

“Oracle have shown AWS, Snowflake and other database providers how to design and architect a True MySQL Cloud Database. Customers can expect MySQL HeatWave to perform about 7 times faster than Amazon Redshift or Snowflake at 2-5 times lower cost. The benefits over Amazon Aurora are even greater.”

Another solid quarter from Oracle, and in these turbulent times, it is not surprising that investments have dropped. That should, hopefully, be temporary. Hopefully, while Catz acknowledged that Oracle had suspended operations in Russia, there was no information on how that will impact Oracle.

Oracle has around 160 employees in Russia and around 90 in Ukraine, according to LinkedIn. What will happen to them, and what is the impact on the bottom line? Considering the size of Oracle, it is unlikely to be significant, but Oracle will lose around 6 billion Roubles in revenue potential, according to TADVISER (2020 figures).

The next real news is the closing of the Cerner acquisition. Oracle has $23 billion in cash and marketable securities, enough to complete the acquisition of Cerner, which Catz hopes to close in Q4. If that fails, it has a huge war chest to consider another option. It will almost certainly have a plan B.