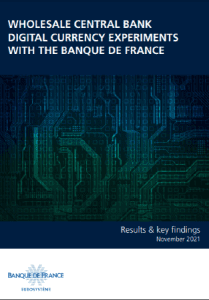 In 2020 the Banque de France (BdF) decided to launch a programme with market participants to explore the issuance and use of a Wholesale CBDC (Central Bank Digital Currency (W-CBDC), understood as a new form of CeBM (Central Bank Money) that could become available on a distributed ledger.

The BdF rationale is derived from three reasons. First, unregulated digital currencies could lead to a loss of sovereignty in the field of payments if foreign players become dominant in such markets. Secondly, as foreign CBDCs or stablecoins linked to foreign currencies develop, challenges to monetary sovereignty could arise. Thirdly, the role of CeBM could then find challenges up to a point where CeBM could no longer serve as an effective anchor for the financial system

In a recent report about these experiments, the BdF described its findings. As Nathalie Aufauvre, Director General of Financial Stability and Operations, and head of the BdeF’s experimentation programme put it: “These experiments with a wholesale CBDC were carried out in record time, in less than a year, and show how interested market participants are in the subject, as well as their expectations regarding public authorities.

“With the emergence of financial assets in tokenised form, we have shown that a CBDC, combined with the potential of new technologies, can ensure the safe settlement of transactions in these assets and thereby contribute to the secure development of these innovations. We have also demonstrated that a wholesale CBDC would be of benefit for cross-border and cross-currency payments as it would improve the efficiency of processing chains.”

Following a call for applications, the BdF initiated nine experiments (see diagram below) focusing on the use of CBDC for wholesale payments, including cross-border and cross-currency payments and securities settlement. Seven of these experiments have completed, with two ongoing. 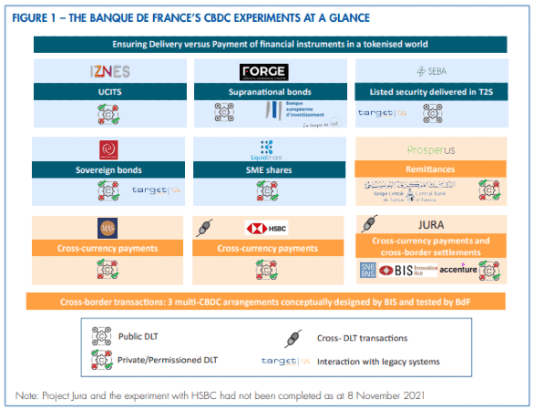 The experiments showed how a W-CBDC can be used to:

They also explored different ways in which central banks could make CeBM available for securities settlement using DLT-based platforms, including by leveraging existing infrastructures such as TARGET services in Europe. In this context, a W-CBDC could contribute to the secure development of tokenised financial markets.

This would enable market participants to benefit from the advantages of DLT, such as the integration of processes and straight-through-processing of securities settlement, while continuing to provide safe settlement in central bank money. This would also be in line with central banks’ mandates and the pivotal role of CeBM for interbank settlement.

Additionally, the experiments indicated how a W-CBDC could be used to complete cross-border transactions, including cross-currency payments. As various jurisdictions may possibly issue a CBDC in the future, interoperable CBDC systems could help to simplify and enhance the performance and accessibility of cross-border and cross-currency payments. The BdF’s experiments pursued this approach, exploring various possible types of multiple CBDC (mCBDC) arrangements.

For example, in the first case, one way to settle both legs of transactions on the DLT would be to use crypto-assets, or stablecoins, as a settlement asset. However, the BdF points out that there are significant regulatory, financial and operational uncertainties surrounding these assets, despite ongoing international efforts, making them very risky for financial intermediaries to use at the current time.

In this context, the main question is whether the settlement asset for these tokenised markets can be CeBM in order to preserve the anchoring role of central bank money and settlement safety. 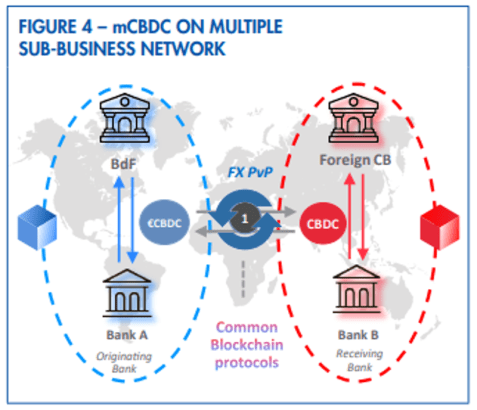 The BdF’s report examines both uses cases and describes them in detail with clear illustrations (for example, the one above).

The BdF concluded: “… a wholesale CBDC could be part of central banks’ strategies to accompany the rise of tokenised finance. A wholesale CBDC would stand as a way to accompany innovation while maintaining current standards in terms of settlement safety, through the use of CeBM as a settlement asset for wholesale transactions. It could also play a unifying role for financial markets, preventing the fragmentation that could arise from the development of private settlement assets functioning in closed loops with only limited interoperability.

While these questions are moot, for the moment, the Banque de France report should become required reading, not only for those in banking but also all enterprises that interact with banks: in other words, everybody.