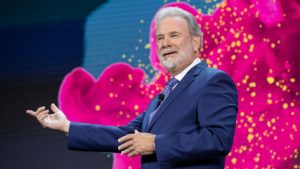 “At Sage we really looked at who we sell to. We do a really good job of selling to small and mid-sized businesses. Not so much on enterprises where typically 5,000 employees and above would be considered an enterprise account. That is the purview of SAP, Oracle and Workday.

“Very small or small accounts 1-99 there are Sage products there and that is where we compete against Xero and QuickBooks etc. Sage Intacct will sell to small companies with ambitions for growth and medium sized companies.“

Sage segments these companies into smaller, 100-500 employees, and medium sized, 500-2,000 employees. Typically, Intacct starts at companies with around 100 users, though this will vary depending upon the industry. Intacct can serve larger companies and has some companies in the 500-2,000 size.

The company also has products that attack the larger market such as Sage X3 (recently renamed back to this historic name from Sage Enterprise Management). This renaming is something that both Enterprise Times and Reid appeared to agree was the right decision.

Reid’s role is around the Sage cloud native solutions for the mid-market rather than all of its solutions. It makes his role more focused unlike that of Aaron Harris who, as CTO for the whole of Sage, has to consider the wider picture.

Reid also explained where the Sage cloud native solutions fit. According to Reid: “Sage Intacct is the leading solution in the world according to Gartner Group and a bunch of other analysts.”

It is also: “the preferred provider of accounting software for the AICPA” organisation in the US. It sits in the small-mid market for Sage with Sage People mainly for medium to large organisations. Both of these are cloud native. The big news at Advantage was the integration between the two. Reid noted that Gartner has already referred to Sage People as the Workday solution for the mid-market. This integration now seems to add even more credence to that view.

Reid added : “We really do have a great solution for mid-market organisations. We are responsible for cloud native mid market solutions that we are going to market with.”

He added that in terms of vertical markets Sage Intacct and Sage People are broadly aligned. As such, the integration makes sense. It will also enable companies to purchase a far broader solution from a single vendor. He also revealed that the functionality from X3 is unlikely to appear in Sage Intacct, “if ever”.

Where does this leave X3? Reid said: “X3 is a cloud solution and we will continue to invest in it. It is currently single tenant but in that market it doesn’t hold you back that much.“

About the Sage acquisition

Reid has sold four companies before, not always with the same outcome as this acquisition. He is still within the Sage organisation.Taking a more senior role would indicate that he was very happy with how it has gone. Many of his leadership team now have a wider remit within the bigger Sage organisations.

ET asked Reid how has the Sage acquisition of Intacct fulfilled its promises. “I am extremely happy to tell you that everything they said they were going to do they have done and done respectively. We have got more resource than we anticipated when it happened. We were going to go worldwide with the IPO funds.

“Sage, because they have been dealing with these countries for decades, they had the expertise to tell us what to do. We also received resources and assets to bring our plans forward and we nailed these plans to the day.

“We believe that we took 1-2 years out of the development process to go international. Even if we had the money we would have had to find the people, put everything in place and even then understand all the requirements of each different country.”

Sage Intacct has already launched in Australia and should be about to launch in the UK (November 2019). It is not stopping. However, while it supports multi-currency and can support multi-language invoicing, it does not yet support full multi-language support across the application. This will take longer to complete and no one Enterprise Times spoke to at the conference was able to put a clear date on it.

It is clearly being worked on and there may be an announcement about timescales once the UK launch is done. That expansion to other countries will happen far faster than Intacct would have been able to do prior to the acquisition.

Reid added: “They said that they would help us go international and Steve (Hare) said during the negotiations. ‘We are going to be able to invest more in this than you could do yourself as an independent company. We generate a lot of cash and have an incredible balance sheet. We have an extremely large R&D organisation and we can pour resources and funds into you that you could never do.’

“That is absolutely what has happened.”

An example of this, according to Reid, is the AI functionality it launched this year. Intacct was interviewing data scientists in California but the salaries they were asking for were higher than the execs. The Sage AI Labs, now under the control of Aaron Harris, has delivered its first solutions for Sage Intacct. It will also roll them out across the rest of the portfolio according to Reid.

The challenge that AI brings

Enterprise Times asked Reid what his current challenges were.

“We are evolving now into the sea change of AI and machine learning. It is a massive opportunity that has challenges associated with it and it is totally brand new. It will do things that are spectacular, we will do things that will be spectacular and we will try things that won’t work. We will do some trials as we go along and we will learn from them and go in a different direction or do it better, but overall I am wildly optimistic. I think this is the most spectacular time to be in software ever.”

“Continuous wild customer success, our customers are able to have evidence that we made a difference in their business.“

What was the latest business book you read?

“Principles by Ray Dalio. It is not light reading, there are 250 principles and if you want to be successful you have to do all 250, well you could skip a few.”

Will you be the next CEO of Sage?

“No. There is no need. I have been a CEO and Steve Hare is doing a fantastic job. To see him transform from a CFO to CEO. CFO’s are all about risk and making sure that everything happens the way you expect it to. CEO’s are all about opportunity and aspiring to be better than you ever thought you could be.

“Steve has made the switch instantaneously. He has redirected the whole organisation to be a great SaaS company driven by customers, not by the financials and understanding where the competition is and what customers need. He understands how we can provide great value to our customers. Already in a year he has changed the culture. There is no need to have a change, he has my 100% support and I love working with him.”

There may be some questions still over the direction of Sage and its leadership in some quarters. However, talking to Reid and several other employees it is clear Hare has made a positive impression. Former Intacct employees and customers are also still positive about the acquisition after two years. That is not always the case with software acquisitions. Customers are seeing a faster cadence of delivery and while the internationalisation impacts few, it is still recognition that the software is doing well in the market.

Reid’s clarity around the market segmentation approach for Sage was refreshing. It has sometimes been absent in the past. While there are still questions about the legacy products, their future and customer roadmap, it is clear that it has ring fenced the cloud native applications and is looking to accelerate their growth.