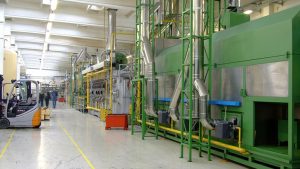 The conversation looked at a wide range of issues. One area where Sinfield is seeing growth is in artisan engineering companies. They are delivering high quality products and there is increasing demand for their goods. ET asked Sinfield if artisan could ever replace traditional manufacturing? He accepts that there is a gap between mass market, low cost manufacturing and the often bespoke and high-end world of the artisan manufacturer. However, there is clear evidence that the new breed of artisan engineers is restoring the UK’s reputation for quality.

But for manufacturing to have any real future there are significant hurdles to overcome. Cost is clearly one of them but two fundamental challenges are skills and productivity. The UK has spent 25 years trying to transition to a degree-led economy. It has left it woefully short of vocational training and apprenticeships. Sinfield accepts that this is not something that can change overnight. What is needed is a change to the education system and the removal of the stigma of being an apprentice. The latter is something that began with the over focus on degrees.

The issue of productivity is more complex. There is no easy fix for this but the UK has to change the perception that productivity is too low to sustain a manufacturing sector.