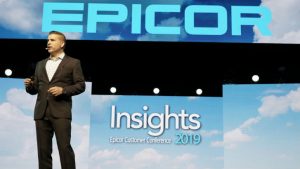 In a break from the intensity of new product announcements from Epicor Insights, such as Scala, Prophet 21 and Epicor ERP Enterprise Times had the opportunity to talk to Steve Murphy, CEO Epicor. In a break from the normal update questions around the business, ET spoke to Murphy as part of the Business Leader profile series. He talks about himself, Epicor and the wider industry.

ET: Who is your inspiration and why?

Steve Murphy: “I read quite a bit. One of most courageous people I have read about is Lincoln. Lincoln had a really tough job. He stepped into the middle of a lot of problems and was willing to do whatever he had to do to keep the Union together. Any leader that is going to build something of lasting value is probably going to have some crisis, tough issues that they deal with, where you are going to be willing to takes some tough risks and make some harsh trade-offs. He has inspired me.”

ET: How would you describe your leadership style?

Steve Murphy: “Hands on but not to the point of micro management. That is a lesson I have learnt. You have to know enough to participate in decisions, but you can’t be telling people how to do their jobs.”

ET: Whats is the core purpose and reason for being Epicor?

Steve Murphy: “For me, it is to enable what I would describe as the manufacturing renaissance that is going on. Manufacturing, distribution, retail, it’s all those businesses. There is a renewed belief and thesis that you can make it yourself, you can make great products and you can source them domestically. It doesn’t mean we shouldn’t trade across borders, but there is definitely a renaissance going on.”

ET: Isn’t that a very US centric notion, with the current threat of trade wars?

Steve Murphy: “We are also seeing it in the UK. I don’t think we are headed there (Trade Wars), I can’t read the tea leaves on what he thinks, against what he (President Trump) says. I do think is that he feels like with China we need a have a fair deal, we need a square deal.

“It is not China’s fault that we have allowed it to slip a bit much. That is the only international issue that needs to be fixed and I think it will get fixed. As far as any other tariffs or trades I would tend to think less is more. We should have as little of that as possible. Globally there is a manufacturing renaissance going on. I think it is part of why we are growing, why we are successful.”

ET: What was your darkest (business) day and how did you overcome it?

Steve Murphy: “The toughest thing for me was about 3 years ago at OpenText where I was president. I came to the conclusion, collectively with the CEO, that we didn’t both need to be there and that I was probably going to leave. I respect the company but I had to make a career choice and leave a job that was really good. It ended up in a search where I met Epicor, I met the KKR guys and I really had the choice, but that day that preceded this was a dark day.

ET: What was your proudest moment?

Steve Murphy: “It may have been over last few days here as far as seeing some of the cultural changes you can see in the energy levels of our employees and our customers, and putting on a show this year. A year ago it was optimistic and headed in the right direction but clearly we are hitting our stride and we have got a lot of things right to get to that point and I am proud of getting to that point.”

Steve Murphy: “Occasionally it is a very lonely job. Any CEO who hears that will know what I mean. You have to accept that it is part of the scene. In the end you have to make the decisions on your own.”

ET: What was the latest Business book you read, your favourite book and/or podcast?

Steve Murphy: “I read Howard Schultz’s book “From the Ground UP”. Two reasons, one I knew I was going to interview him and the other one was I really do go to Starbucks. I am a big fan of Starbucks. It was one of the reasons I wanted to interview him. I was touched by his personal story.”

ET: What’s the worst and best decision you’ve made as a CEO?

Steve Murphy: “Worst: Once I mistakenly blamed a head of sales for a significant business problem that wasn’t his fault. It turned out that the company had brought a product to market that wasn’t that good. It was tough to sell. I was eventually able to rectify it, that was a mistake on my part, it was a bad one and I learnt from that. Lesson being that if something is not selling, there is a good chance it is not a very good product no matter how good the salesman is.

“Best: A recent decision. The significant increased investment in product over the last couple of years. It is a little bit of a leap of faith because you can spend a lot of money on product and you may not see the return for a year, two or three years. I think our customers have responded quicker than I expected to some of the improvements to the product.”

ET: What is your vision for Epicor?

Steve Murphy: “My 3-5 year vision is that we are a 2 billion dollar global company where more than half of our business is SaaS; More than half of our recurring revenue is SaaS. We are able to effectively compete against the largest software companies where we choose too for enterprise deals, without any sacrifice to the mid market. I believe that the product is already that good. But those are expensive sales cycles I enter into with a great deal of caution.”

ET: Does that mean you are starting to enter into them, the larger enterprise deals?

Steve Murphy: “We are, but we are real choosy.”

ET: What are the key business challenges for the next 12 months?

Steve Murphy: “We just touched on one. If we are going to go upmarket, making sure that we know what we are getting into, we don’t do it at the expense of any other business segments and we won’t. That will be about being choosy about where we go upmarket into enterprise. I think that there is a lot of hard work around modernising, continuing the process and modernising, whether it is kinetic and getting that through all of our core products and then architecturally we are somewhat over the hump on that. We have caught ourselves up across distribution, manufacturing, and retail, and we probably have some work to do on modernising our automotive product structure.”

ET: What are your personal challenges for the next 12 months

Steve Murphy: “The biggest one for me is to maintain a sense of balance. I have three kids that are still home, teenagers, 13,14 and 17. They will be gone pretty soon. I need to make sure as a dad and husband I am available enough so I don’t feel like I shorted them for the career. That is the biggest challenge.”

ET: What keeps you up at night?

Steve Murphy: “The Last week of every quarter I lose sleep just making sure that we hit the numbers. Like Howard Schultz said it is the cost of doing business. If we are generally on plan, which we have been, or ahead of plan, it gives us a lot of latitude to spend money on our customers, employees and product. But we have got to achieve well enough that the investors are happy, reasonably happy.”

ET: What does the competitive threat landscape look like?

Steve Murphy: “We are not under the radar anymore, would be the big one. I think that the 2-3 largest software companies in the world are starting to, when they see us in the sales cycle, get a lot more serious about trying to win that deal. That is the biggest one. I do think that when it comes to product differentiation, we do have a better product if we are sticking to our core markets. Doesn’t mean we will win though.”

ET: What’s the one question you’d like to ask another CEO to answer?

Steve Murphy: “The biggest one for me is how do you seek council and get an objective opinion that could help you make a decision? What is the best way to do that? You can’t really seek it inside your company because you will be talking to someone who works for you. If you seek it outside you often can’t do it because it breaks confidentiality. If you go to the board you are talking to people you work for. It’s pretty hard!”

ET: Where do you seek counsel?

Steve Murphy: “It may sound a little silly. My wife is a very shrewd strategist. We have been married 19 years and she advises me on a lot, business, personal, everything else. Then I’ve a couple of best friends that I have stayed in touch with over the years that I can feed those questions off.”