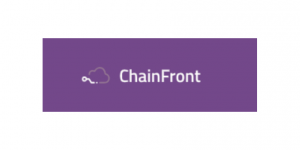 ChainFront’s APIs enable enterprises to build blockchain applications and eliminate the need for management of digital wallets. As an API-as-a-service provider, Chainfront claims to be able to remove the complexity of using, building and managing blockchain wallets while maintaining enterprise-grade security. This occurs with the launch of public APIs together with a self-service developer portal.

“We looked around the blockchain ecosystem and saw that in order to drive mainstream adoption for users to interact with blockchain assets in a meaningful way, the simplicity and overall experience needed to vastly improve. Not surprisingly, no one wants to manage their ‘bank’ or their security. At the core of the issue is the what we call the ‘wallet’ problem,” said Alan Warms, CEO, ChainFront.

Wallets allow end users to store private keys and execute transactions. But a user can lose his or her on-device wallet (on a mobile device, or browser) via any or all of:

With such a loss, that user’s ability to execute transactions and access his or her cryptocurrency has gone forever.

With ChainFront, users no longer need to back up keys or keep track of an on-device wallet. The Chainfront approach removes these from the equation. Developers can create secure, simple user experiences where private keys are created within the secure area and never transmitted elsewhere.

To do this, ChainFront utilises Vault by HashiCorp – a secret key management and data protection tool with code-loading support and a virtual Hardware Security Module. The service is deployed in private subnets of Amazon Web Services (AWS). These:

ChainFront’s vision is, therefore, to enable mass blockchain adoption accompanied by high levels of security and usability. It hope is this will foster a next wave of crypto applications.

The Chainfront API-as-a-Service and the Coinbase example

After working on a number of blockchain implementations, founders Alan Warms and Darryl Anderson believe tokenisation has the potential to change economies. Yet one of the impediments to widespread blockchain adoption remains the user experience. Blockchain is complex and not, so far, for the fainthearted.

With the launch (of an API-as-a Service), those building applications which interact with blockchain data and assets can now address the ‘wallet problem’ – by implementing ChainFront’s API-as-a-Service. End users – whether consumers or inside of enterprises – can then execute transactions with username, password, and multifactor authentication. (Developers interested in this approach can now start to test out ChainFront’s APIs.)

One of the most successful blockchain related companies is, arguably, CoinBase. Many attribute its success to its blend of simplicity and abstraction. In effect, CoinBase made the process of buying and storing crypto assets as simple as sending someone a few dollars on Venmo.

ChainFront’s API-as-a-service allows developers to create a similar experiences for customers by:

“Before Coinbase, previous attempts at centralized private key management were poorly implemented, resulting in many of the exchange hacks that have dominated the press over the course of Bitcoin’s history, such as Mt. Gox,” said ChainFront cofounder Darryl Anderson.

“Coinbase proved that eliminating the wallet can drive mass adoption while also proving that secure, centralized key management can be accomplished. ChainFront brings this capability to any blockchain project on either public or private blockchains. The self serve platform is available live on Stellar today and Ethereum, Ripple, and Bitcoin, and other various permissioned blockchains coming soon.”

Using private and public keys to execute transactions is inherent in all tokenisation applications. But tokenisation-based applications rely on cumbersome ‘wallets’. As Messrs Warms and Anderson (and many others) argue, these present significant user experience and security issues when:

For the blockchain applications to go mainstream, Chainfront asserts that the user experience must be simple and secure. Public and private key management must be completely invisible to the end-user. This is a truth hard to deny.

While Chainfront’s API-as-Service for eliminating wallets intrigues, the question which Enterprise Times finds unresolved is: is the ‘wallet security problem’ not subcontracted out to AWS?