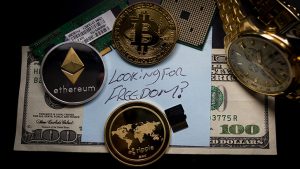 Theft of cryptocurrencies in 2018 has already netted hackers and scammers $670 million. This number represents 40% of all the monies taken over the last six years. The details were revealed by token investment-management community Crypto Aware.

There is a caveat here. The numbers are based on the value of a cryptocurrency at the time it was stolen. As such, the astronomical rise in some currencies in the last 18 months makes the figures look worse. For example, the loss of 850,000 Bitcoin from Mt Gox would be worth around $9.5 billion based on the value of bitcoin today. However, it is precisely those rises that have increased the number of attacks.

The rise in attacks will concern both individuals and companies. There is increase interest in cryptocurrencies from enterprises. Some see them as an addition to their current currency market and a potential investment. Others have been buying them in order to pay off hackers. The rise in value of cryptocurrencies and ransomware attacks means waiting to buy after an attack can add to the costs.

Banks are becoming wary of crypto purchases with many banning customers from buying them. Just this week, the Bank of Montreal expanded its crypto purchase ban. Users of the Interac debit card will no longer be able to pay for cryptocurrency purchases. This ban comes just a few weeks after the bank barred customers using branded Mastercard debit and credit cards from doing the same thing.

Another driver for increased attacks is the rise in Initial Coin Offerings (ICO). A number of governments last year outlawed the use of ICOs. Recently, however, Swiss regulator FINMA published guidelines on how it will treat ICOs.

None of this is dampening demand or interest. It seems that barely a day goes by without another ICO announcement. Many ICOs raise millions and this has attracted scam artists to the market. With the mishmash of confusing regulation around the world, they see plenty of opportunity to make money.

What is being stolen?

Most attacks have focused on stealing Bitcoin (BTC). This is because it is the poster child for cryptocurrencies although volatility in its price means it has become a significant gamble. After hitting an all time high of $19,000 per BTC in December 2017, the price has since fallen to below $7,000. A lot of people who rushed to buy BTC at the end of last year have since lost a lot of money.

However, there are increasing attacks on other cryptocurrencies. Ethereum has taken a number of hits in the last year as hackers and scammers widened their attacks. There have also been attacks against Litecoin (LTC), Stellar (XLM), Nano and others.

The widening of the attacks to other cryptocurrencies is only partly due to their value. Traders and those who are investing in the wider cryptocurrency market are hedging their bets on newer currencies and ICOs. This means that when exchanges are hacked, there is a wider choice of currencies to steal.

There has also been a significant widening of the buyer base. Many of those buying are very inexperienced and do not have strong security on their cryptocurrency wallets. This makes them easy prey for scammers and hackers alike. One sells them the latest snake oil while the other breaks into their wallets. Many hacks come from poorly written wallets and the reuse of security credentials that are stolen in large data breaches.

What are the biggest cryptocurrency losses

Crypto Aware reports a number of losses of $50 million or greater. Some of these are estimated as there is little information as to what has really happened. In other cases, the attacks are marked as ongoing. This means that the size of the theft could increase.

The top five of all time:

There are a further 42 attacks listed on the Crypto Aware website including the NiceHash loss of 4,700 BTC worth more than $62 million.

The rise of cryptocurrencies is often portrayed by governments as being driven by criminals. The reality is far more complex. Individuals and companies are beginning to buy, sell and trade them. Despite recent falls, values continue to climb and that makes them attractive to speculators. There is also an increased interest from those who’ve been brought up in a digital world. They see cryptocurrencies as belonging to their generation and something to embrace.

While it is possible to track the movement of coins from wallet to wallet, it is very hard to identify the owner of the wallets. This has led many banks to ban their customers from buying and selling cryptocurrencies. Banks are bound by legislation that requires them to Know Your Customer. The anonymity behind a wallet breaches that and they are moving to protect themselves.

The problem for everyone, individuals, governments and regulators, is that this a fast moving market. The technology is far from secure when it comes to the wallets that protect cryptocurrencies. This means there is a significant opportunity for hackers to break in to wallets and exchanges to steal large numbers of coins.

Ironically, unlike many fiat currencies, precious metals and gems, coins can be tracked from wallet to wallet. This makes them more traceable than their established counterparts. However, the anonymity behind wallets is why governments are worried about them. Ironically, that anonymity is no different to that offered by many tax havens to their bank account holders.

For now, anyone who is trading in cryptocurrencies or taking part in ICOs needs to keep their wits about them.