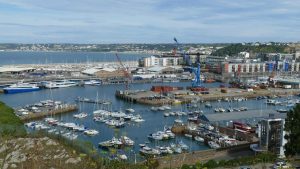 TouchstoneFMS Ltd (Touchstone) has won a deal at Ports of Jersey (PoJ) to install Infor SunSystems. It will replace the Oracle JD Edwards system used as part of the State of Jersey IT solution. The deal, part of a major business transformation program, will also see the implementation of Infor EAM (Enterprise Asset Management) and Infor d/EPM (dynamic enterprise performance management).

The latter two solutions will replace a spreadsheet-based solution and will deliver significant benefits. Touchstone will supply, implement and support the new financial management, procurement and asset management systems. Infor supported Touchstone during the sales process.

The Ports of Jersey needed a new ERP solution after it spun out of the State of Jersey (SoJ) in 2015. It continued to use the Oracle JD Edwards solution while they invested in and built the IT infrastructure. This meant that the solution they looked for would be deployed on-premises initially. However, it ideally wanted a cloud-ready solution that it could maintain and upgrade easily.

Enterprise Times asked Touchstone about the selection process. From a long list of around 40 it whittled this down to a short list of five: Infor, SAP, IFS Global, Epicor and Yardi. It was hoping to find a single supplier, if possible, within its budget. Otherwise they would look at separate suppliers for each of its requirements.

In the end they chose the combination of Touchstone and Infor. Touchstone is a global Infor partner with offices in Houston and London. It has worked with SunSystems for 30 years and with Infor throughout its history. It now has expertise across multiple Infor applications including: Infor EAM, d/EPM, HCM and BIRST.

For SunSystems the spokesperson replied: “The flexibility of the chart of accounts and powerful built in multi-dimensional analysis capability. They want to look at the PoJ business from multiple perspectives, legal (IFRS and SoJ), operational and departmental.”

For EAM: “The power of the Asset Management functionality, they were very impressed with the references and in fact went to the Infor EAM Summit in CERN where they were able to talk to other users.”

For d/EPM: “They want a portal based budgeting and forecasting capability (all spreadsheets currently) as well as self-service reporting for managers and budget holders.”

More important perhaps were the words of Ports of Jersey, Chief Financial Officer, Andrew Boustouler, who commented: “Over time we considered a number of solutions, including large ERP brands. We were impressed with the team from Touchstone, their skills and experience feeling very comfortable early on in the selection process that they would be a reliable business partner. The Infor solution they proposed was attractive because of the richness of the solution, the modern technology it is built on and its look and feel. We now look forward to working in partnership with Touchstone on the implementation.”

Boustouler pulls out two things of note in this quote.

This is a big project but not a huge deal in terms of licenses. Ten licenses for the accounting systems SunSystems, seventy for Infor EAM and thirty for d/EPM. We also asked Touchstone about the implementation project.

Touchstone are not hanging about with the delivery of the initial phase. The financial systems including “SunSystems, d/EPM and the procurement of EAM are to be rolled out by end of 2018” according to the Touchstone spokesperson.

The asset management will take longer to complete. This is not surprising. The Ports of Jersey manage a large number of assets. Its remit includes plant, machinery and assets of Jersey Airport, Jersey Harbours, Jersey Marinas and the Jersey Coast Guard. That includes items within the Airport and Harbour Terminals, Airport Tower, fire safety trucks, cranes, pumps, generators and vehicles. It also manages numerous buildings. It will look to starting rolling EAM out from April 2019.

PoJ are not looking to implement IoT across the estate as part of the EAM project. Though it might follow at a later phase. That is initially surprising but Touchstone also added “This whole project is about digital and business transformation, all the key business processes are being reviewed, streamlined and improved and if necessary changed completely to encompass best practice, including embracing maintenance standards like SFG20.”

Adding IoT into that mix would increase the complexity, costs and probably more importantly increase risk of failure.  IoT may follow in a later phase though.

This is an important win for Infor. Once delivered, Infor will have a better chance of winning contracts at larger airports, sea ports and other similar organisations. PoJ could be the perfect model for larger organisations. It is a complex function and Infor will want them to leverage the new systems and the latest technology that Infor is offering. Some of which it will likely announce at Inforum 2018 this week.

That Infor won the selection process against such stiff competition will be a boost for both them and Touchstone. For Touchstone it is also an impressive project to deliver. Jersey is an interesting location and has an set-up that is at times very modern and others seemingly archaic. PoJ are modernising its business processes as part of this project. In time not only the inhabitants but the many visitors to the island should benefit.

David Singh, Sales Director of Touchstone’s Infor business unit commented: “We are delighted to be working with PoJ on this project. Through the selection process we’ve forged a great relationship, taking the time to really understand its business and requirements. This understanding, along with our in-depth knowledge of the Infor product suite, and implementation expertise really won through in the face of stiff competition.”

Latest News Ian Murphy - March 20, 2020
0
NutriBullet was hit by a malware attack in February that continued for over a month. Two days ago, RiskIQ published a blog showing that...