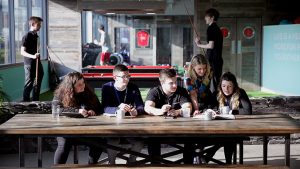 Apprenticeships are seen by many parents, teachers, career counsellors and even employers as a poor substitute for a degree. It’s a model of thinking that has become commonplace in the last three decades. It has been driven by the assumption that a degree is more important to employers rather than on-the-job training and practical skills.

The problem, is that the perception doesn’t match reality. Degree graduates are resorting to working in jobs that have never, and will never, require a degree. This has left many with debt mountains and no clear future. The challenge is how to change perceptions and move forward.

Leading that call for a change of attitudes is technology entrepreneur Lawrence Jones MBE, CEO, UKFast. Jones has called on teachers, students and parents to rethink their perception of apprenticeships when compared with university degrees.

Jones said: “We work with more than 60,000 pupils and students across Greater Manchester and beyond, and held more than 400 education events last year. During these events, we’re hearing that apprenticeships simply aren’t being pushed as a proud higher education option in the same way that university is. This absolutely has to change!

“We see huge opportunities in our industry for apprentices to progress extremely quickly and gain relevant, work-ready skills directly from professionals. On the other hand we also see graduates coming through university who are not at the same experience level and almost need to start again.“

Employers struggling with a lack of practical skills

One of the challenges for many employers when bringing on new talent, is skills. It costs a lot of time and money to teach people how to do a lot of tasks inside a company. This is not just an issue for manual labour.

In cyber security, for example, training an analyst how to hack and understand the hacker takes time. University degrees in this area are a long way from helping deliver the right practical skills to do this.

Last year, GCHQ and the NCSC launched the CyberFirst Degree Level Apprenticeship. Apprentices get £18,000 per year for the three year course and work at GCHQ. They leave with a degree in cyber security that will guarantee them a highly paid job in many countries around the world. Despite this, two weeks before the deadline for applications, there were still places. This highlights the attitude problem that Jones is talking about.

What is UKFast doing about this?

Unlike many companies, UKFast is putting its money where its mouth is. Jones explains the difference between the debt a graduate ends up with and what an apprenticeship earns. “On top of the level of training there’s also the question of debt. If an apprentice earns £16,000 a year for the first two years and then between £26,000 and £30,000 in the third year, which is the case for a great many of our apprentices at UKFast, they are likely to be nearly £100,000 better off than a student finishing a three year undergraduate degree.”

UKFast has invested in its own apprenticeship scheme. Jaqueline de Rojas CBE, President of techUK recently visited UKFast in Manchester. She told Enterprise Times: “They have created a training programme and employed three full-time teachers. They’re not getting what they need from the education system in their area, so they are growing their own.”

This approach now means that UKFast is able to deliver Level 2, 3 and 4 apprenticeships across a range of subjects.

It is not just about training apprenticeships. It is also about jobs. UKFast launched its apprenticeship scheme four years ago. Now, more than 15% of UKFast’s 400-strong workforce is made up of former or current apprentices.

De Rojas also said: “When local companies closed their apprenticeship schemes, UKFast stepped in and took a number of those apprentices.”

The shift in UK education policy in the 1980’s has seen a constant decline in vocational training and apprenticeships. The assumption is that a degree is the gateway to a career and better pay. The reality is that the UK doesn’t have enough jobs for the graduates it is producing, the pay doesn’t meet their expectations and many have large debts when they graduate.

For employers, the university system is still leaving them with a lot to do. They have to invest significantly in retraining graduates in what really happens in the workplace. This means that a major shift is needed in how we educate future generations.

All of this puts more emphasis on Jones plea for a change of attitude when it comes to apprenticeships.