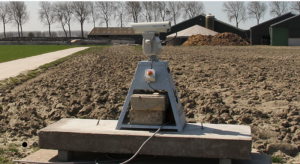 A Sonoma, California vineyard uses robotic lasers to scare birds and solve its bird problems. This decreased crop losses and bird nuisance by over 99%, saving around US$25K a year.

Jim Griffin, the owner of Griffin’s Lair in Sonoma County,has a 21 acres of vineyard. Annually these suffer bird damage to the grape crops. To combat bird predations he used to spend around US$25K each year on netting and labor to try to dissuade the birds. The problem was that such traditional methods are labor-intensive … and didn’t solve the bird problem. For example, the biggest disadvantage of bird netting is that it is not effective for areas where many birds are foraging or perching. The birds still can get under the net and damage the grapes. The net also makes it difficult to work on the grapes for annual pruning, fertilizing or removing damaged grapes.

“We tried many different bird deterrent measures but most are difficult to use, and lasers make it easier and very effective.” says vineyard owner Jim Griffin.

The scale of the problem

Bird problems make the grape growers suffer losses in the millions of dollars every year. According to the research done by A. Anderson, C.A. Lindell, K.M. Moxcey and others, California and Washington states have the biggest grape damage caused by birds. They have calculated this at some US$49M for California and US$13M for Washington.

Current yield-loss percentage due to bird damage in grape growing in California is 2.9 % per year. The birds responsible for damage to grapes include American Robins and European Starlings.

Though not previously deployed in California, other vinyards around the world use automated lasers like the Agrilaser Autonomic. These include:

The laser bird deterrent technology takes advantage of a bird’s natural instincts. Birds perceive an approaching laser beam as a predator and take flight to seek safety when the laser beam passes by. There are now more than 6,000 users of bird deterrent lasers worldwide.

Birds are a problem for wine makers. They are also a pest for several other industries, including:

To illustrate this, customers of Bird Control Group, which sold the Griffin’s Lair installations, include Portland International Airport, Shell and Total. In each case the objective is keeping birds away.

For Enterprise Times this is an instance of lateral thinking. In the context of aviation, for example, lasers are normally thought to be dangerous – with stories abounding of pilot sight damaged by rogue laser users on the ground. With solar powered devices like the Agrilaser Autonomic, it is possible to deter pests without deploying chemicals or intensive labour.