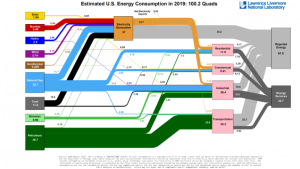 The Lawrence Livermore National Laboratory (LLNL) has published its 2019 Energy Flowcharts for the U.S. One of these, pictured left and also shown in greater detail below, should attract much attention.

The key lies in two aspects. The first is ‘rejected energy’. The second indicates where rejected energy originates – as well where it does not occur.

Rejected energy is “is part of the energy of a fuel – such as gas or petrol – that could be used for a purposeful activity, like making electricity or transport. However, because of the technologies that we currently use to consume fuels, a lot of it gets tossed out by turning it into heat in the environment, which is totally useless. For a coal fired power station, for instance, about 2/3 of the energy released when the coal is burnt is discarded as heat in the environment.”

What the LLNL flow diagram shows is:

Worse, that 2/3rds adds to warming of the globe because mostly it is a ‘necessary’ by product to enable the productive energy. Yet this does not have to be the case. As examination of the flow diagram shows. Hydro, solar and wind do not contribute in the same way as (say) petroleum, natural gas, biomass and coal.

Closer examination of the flow diagram indicates how much, at least in the U.S., the use of energy for transportation ‘costs’. Multiple implications flow from this, as a thought provoking (albeit coming from a publication with an ‘angle’) analysis in Electrek reveals.

As it says (as part of a longer analysis): “Almost all energy going into transportation currently is in the form of petroleum, and yet those internal combustion cars and jet planes are mostly producing heat and very little relative energy, to the tune of 1 unit of energy per 4-5 units put in. That’s 20-25% efficiency. Compare that to an EV, which is over 90% efficient.”

It goes on to make an even more poignant point, from a global climate change viewpoint: “You don’t need a 1:1 ratio of electric to replace petroleum. That ratio is more like 1:5. The whole US transportation industry uses only 5.93 quads of energy to propel vehicles around. It takes 28.3 quads of mostly petroleum to do so today. Replacing internal combustion or jet engines with their much more efficient electric alternatives means you’d only need about 6 quads of electricity to produce the same movement. That can currently be made by wind, solar, or hydro (if they weren’t doing other things). To put it another way: to get rid of all of the petroleum energy used to run transportation in the US, you wouldn’t even have to double the amount of wind, solar and hydro.”

The LLNL flow diagrams bring to life, or at least out into the open, how inefficient humanity is in its usage of energy. Few consider that, when driving in one’s internal combustion energy vehicle (be it car, van, truck, plane or whatever), how energy inefficient transportation is (not least because of the rejected energy aspect). Moreover, this does not apply solely to transport. In less enormous ways, the IT sector consumes as well. Contrast an SSD with what it takes to spin a disk or tape.

As so often, habit shapes how humanity views an issue. Humanity is familiar with rapid, inexpensive transport – too often without considering the broader implications. Electrek’s point about EVs (electric vehicles) not needing a 1:1 replacement is a good one. Even more so if the electricity comes from wind, solar or other renewable sources. It also provides further justification for blockchain-based energy sharing…