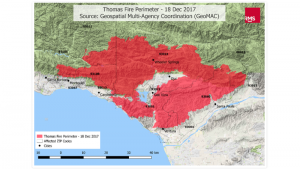 “We are excited to explore renewable energy opportunities through a Community Microgrid approach that will make the Montecito Fire Department and the community more resilient,” said Fire Chief Chip Hickman.

“The Fire Department is all too familiar with the dangers posed by extreme weather events like the Thomas Fire and the subsequent debris flow. This modern energy system will enable us to better serve the Montecito community, as well as provide much-needed redundancy to our essential service.”

In December 2017, the Thomas Fire burned >300,000 acres and devastated parts of Ventura and Santa Barbara Counties (in California). The fire:

The latter mattered. Tree and plant roots had stabilised the hillsides surrounding Montecito, an unincorporated area in southern Santa Barbara County. In just five minutes in January 2018, >12mm of rain fell over those destabilised hillsides. The result was a flow of boulders, trees and 15+ feet of mud in some locations. These traveled downhill at >30kmh, subsuming pretty much everything and taking 23 lives. The flow destroyed 100 homes and damaged 300 more.

The case for Communuity Microgrids arises because both the fire and the subsequent rain-induced debris flow evidence a need for energy resilience. This is, after all, a disaster-prone region where the devastated areas lie within the Goleta Load Pocket, a region that spans 70 miles of coastline encompassing the cities of Goleta, Santa Barbara (including Montecito), and Carpinteria. Because the Goleta Load Pocket is a highly transmission-vulnerable region, this community can benefit greatly from the resilience provided by local renewables.

Community Microgrids represent a different approach to the design and operation of the conventional, power station-supported, electric grid. They rely heavily on DER to:

By leveraging a high penetration of local renewables and other distributed energy resources Community Grids achieve a desired level of:

This includes the ability to create islands for critical loads using monitoring, communications, and controls (MC2). Doing this, exploits efficient load design including local balancing and load flattening. The ‘product’ is:

It is the latter point which has particular significance. A traditional microgrid covers a single customer location (or, possibly, a small number of adjacent locations):

The United States, for example, designed its power system, built now on century-old technology and approaches, to deliver electricity from large, remote power plants across significant distances to the cities and towns where the consumption of electricity occurs. Centralised generation offered a superior approach for a vastly improved power system. This is a pattern repeated across most of the industrial world.

Yet renewable energy, in the form of wind and solar and backed by modern storage techniques (Australia), enables new ways of thinking about electricity (and, conceptually, other utilities). However, utility executives and policymakers have proved reluctant to embrace local renewables. Many fear that the existing power system cannot reliably integrate distributed energy generation.

The effect is that grid reliability concerns have limited local renewables. Worse, without empirical proof that a power grid can integrate greater amounts of local renewables in a cost-effective manner, the reluctance to move forward with renewables slows any transition toward a clean energy future.

The Clean Coalition hopes that, in the USA, such Community Microgrid demonstration projects will facilitate its vision – a move to at least 25% of all electricity coming from local renewable energy sources.

“The Montecito Fire Protection District Board’s unanimous approval of drafting an agreement for a Community Microgrid is a major milestone in moving this Initiative forward,” said Craig Lewis, Executive Director of the Clean Coalition.

“In casting a vote to move forward, the Board has demonstrated a keen understanding of the unparalleled economic, environmental, and resilience benefits that a Community Microgrid will bring to Montecito.”

The Montecito Community Microgrid Initiative is one of these demonstration projects. But it goes further and deeper. Its purpose is also to enhance survivability, the capability of a local ‘area’ to sustain its facilities in the event of disaster (fire, flood, etc.).

If this seems readily apparent, now think more broadly and start to apply Community Grid principles to information technology. In many ways IT has adopted the two extremes of electricity generation:

Neither are hugely efficient. Some ‘middle way’ which combines capabilities could be interesting, for individual and for enterprises.

In one sense cloud computing supporters will argue that clouds are the equivalent of Community Microgrids. But the reality is that most cloud vendors (Amazon, Google, IBM, Oracle as well as many others) are more akin to power stations – except they consume electricity.

Might there be an alternative? Might it add blockchain or distributed ledger technologies to enhance capabilities – much as the Montecito Community Microgrid Initiative will not only generate electricity but also support the Fire Department’s firefighting systems as well as pumped water pressure – and create a new model for IT?

Now, think about 5G and the new forms of edge IT that are imminent.