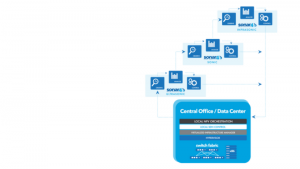 ONS Europe is an open networking forum at which enterprises, service providers and cloud providers across the SDN / NFV ecosystem:

The SONAR4 solution demonstration at ONS Europe addresses the complex challenges of SDN and NFV relative to end-to-end service assurance including:

By adopting virtualisation, CSPs are reshaping themselves in order to compete in the what will be a very different competitive landscape once 5G arrives. The whole basis of 5G forces certain types of activity to the edge, if only to minimise latency and response times. There are plenty of other good reasons as well:

SONAR4 facilitates Communications Service Providers (CSPs) to pursue the promised economics and agility of next-generation Software Defined Networks (SDN) and Network Function Virtualization (NFV) technologies. It does this by mitigating the risk associated with:

For the man or woman in the street, or most enterprises, 5G is just another iteration of communication technology which will raise prices, and encourage handset replacement. 2G, 3G, 4G: so what’s new?

As the telcos and their partners have discovered, 5G obliges more than a jump like that from 3G to 4G. Not only will the transition be double or triply complex but many of the old telco assumptions will have to go out the window as virtualised networking and computing combine. In this context, offering kike that from Sonar4 will be especially useful.