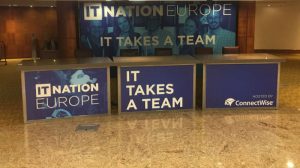 Arnie Bellini, CEO ConnectWise kicked off the ConnectWise IT Nation Europe keynote in London today with the company making three announcements. ConnectWise Unite is now generally available to technology resellers across the globe. It will pilot a new security dashboard in May and launch it in September. He also spoke about the global expansion that ConnectWise is experiencing and what they are doing to support that growth into the future.

Enterprise Times spoke to Gregg Lalle at the event. He compared the direction that ConnectWise is taking to the Salesforce model. It is not about ConnectWise developing every piece of functionality. Instead it will provide the building blocks and the interfaces so that customers can pick other solutions to complete their operational offering.

This was demonstrated by the large number of security and other technology vendors that filled the solutions partner hall. Those companies included Barracuda, Veeam, Sophos, Cylance and Auvik

ConnectWise Unite, making it easier to do business

ConnectWise Unite is now available for TSP’s to take advantage of. The solution enables them to manage, monitor and bill a broad range of cloud-based solutions through a single interface and in their own currency. The cloud-based solutions include Microsoft Azure services including Microsoft 365, AWS cloud services and a range of services from Cisco. Those services include Cisco Meraki, Cisco Spark, Cisco Umbrella and Stealthwatch Cloud. We asked Lalle whether they would extend the integrations to include other cloud and software vendors.

The short reply was “Yes”, but Lalle but not be drawn on whom adding “We are extremely community and partner driven. What my focus is, is to concentrate on analytics and what do the partners want.“

Note that ConnectWise refers to customers as partners.

Single-Invoice Billing: Lalle views this as helping to automate the whole process for customers. It enables them to fully automate, provide aggregate billing across different services and to consolidate into a single invoice.

Visibility: TSP’s can see all the services that they offer to customers to understand the breadth of their portfolio. This allows them to take advantage of any consolidation that is possible.

Monitor: This is pro active monitoring of the cloud vendors. ConnectWise Unite will identify if a cloud service such has failed and can send alerts to customers. This reduces the amount of phone calls that TSP’s receive. It will also ensure that they control the incident from its initiation.

Client management: The solution also has a limited CRM and ticketing facility. As with other ConnectWise modules it is designed to integrate to other modules or third party applications. When connected to ConnectWise Manage the fully power of CRM is available.

Bellini summarized the benefits commented: “Technology teams typically take advantage of a broad range of cloud solutions to meet their customers’ unique needs. What we’ve done with ConnectWise Unite is give our partners the ability to access these disparate solutions from a single pane of glass and greatly simplify the complexity that comes from dealing with the growing number of solutions they use.”

ConnectWise entered its pilot phase last November taking 6 months to reach general availability. It is now focusing on the Advanced Security Dashboard that will go into the pilot phase in May.

In time ConnectWise will add other security solutions. This may even happen during the pilot phase. The ConnectWise marketplace already lists 38 different security vendors that are integrated to ConnectWise modules. It seems likely that some of those will want to be included in this new feature. The launch of the product is due in September.

Founded in 1982 ConnectWise is one of the few major software vendors still in private ownership. Its international growth has been cautious but successful. It is now seeing traction outside of the US in significant numbers. It has 8,400 customers outside the US, most of these are located in Europe. However the largest minority are based in Australia.  Australia and New Zealand alone account for 7.4% of the ConnectWise revenues. One of the announcements was around a new 5000 sq ft office opening in Sydney this month.

It is also looking to expand further in South Africa. It has a growing number of TSP’s who are using its software and has appointed a team dedicated to growing the region. In Europe, ConnectWise continues to expand. It has a successful relationship with a distributor in the Nordics since 2011 which is growing its market share. In Benelux, a region it currently support from its London office, it is looking to expand its presence further and is talking to additional distributors.

In a canned statement Lalle commented: “Over the past several years, we stepped up our commitment to Europe and APAC, and we’re proud of our impact there. When ConnectWise is successful, our partners have been successful, and that’s what we strive for each and every day. ConnectWise has wanted to expand into South Africa for some time now and we’re thrilled to begin this push. We’re applying the learnings from our previous international efforts to ensure we can increase the efficiency and productivity of companies based in South Africa as quickly as possible.”

Talking to TSP’s at the event, ConnectWise offers a complete business solution for them. Historically some have used disparate systems. The latest announcement around ConnectWise Unite and the Secure dashboard demonstrates shows that it is listening to both its solution partners and its customers. The risk is that without bringing more security vendors into the new platform it might risk alienating some.

Unlike Community Unite which is vendor agnostics the security dashboard doesn’t appear to be so. This a reflection of how inportantthe relationship with Cisco is and Cisco partners will certainly welcome the new module. If there is more information given during IT Nation Europe this article will be updated.