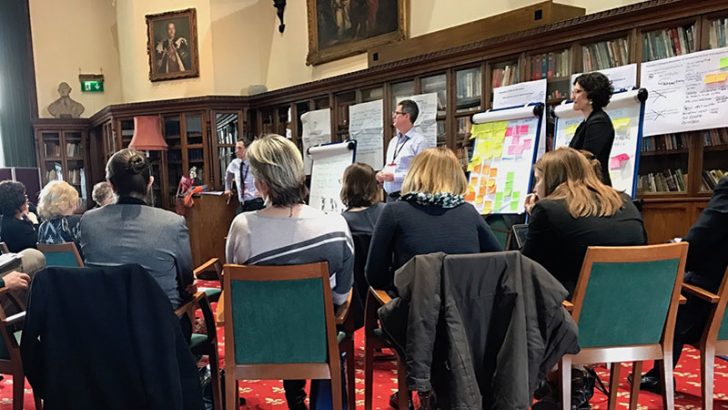 IBM, the Corsham Institute and Salute My Job are all collaborating to deliver cybersecurity training to members of the UK Armed Forces. Over 100 military personnel have undertaken the training offered by the Corsham Institute. It is supported by IBM who ensure that all trainees get experience with two different IBM Security products. The goal is to improve the job prospects for military veterans and help close the gap in cybersecurity staff.

Why the focus on military veterans?

According to Brigadier (Retired) Andrew Jackson, Managing Director, Salute My Job: “I hear employers talk about wanting more military personnel. Each year 16,000 leave the Armed Forces and struggle to find the right job. Many don’t realise the breadth and knowledge of skills they have.”

Jackson’s point is not lost on serving and ex-serving military personnel. Some skills, such as motor mechanic have always been easily transferrable into civilian life. Other skills such as signals and military intelligence are seen as less transferable. This hasn’t stopped over 1,700 companies including IBM, Sage, BP, Jaguar Land Rover and many other household names from signing the defense covenant.

The challenge that many of these companies face is how to bring military veterans into their organisations. Jackson says that: “The institutionalised Armed Forces approach can lead to frustration for both the employer and veteran. We provide advice to employers to build a programme to employ veterans.” This challenge is one of the reasons many service personnel end up swapping one uniform for another and joining the police or prison service.

What is IBM doing?

The Corsham Institute is training military veterans on two IBM security products. The first is i2 Analyst’s Notebook. This helps security analysts reduce the vast amount of data they deal with today to usable intelligence. The second is QRadar, IBM’s Security Information and Event Management solution.

IBM is also a recruiter of military veterans and has faced some of the challenges the Jackson talked about. Julian Meyrick, Vice President IBM Security, Europe, who is also ex UK Armed Forces said: “Veterans and those leaving the forces bring soft skills for the cyber domain. We need people who can deal with complex situations, who can keep calm and not panic. Veterans are also used to operating and following standard processes. When they break down they have the ability to exercise their initiative and respond to the situation.”

This is also what Jacqueline de Rojas, Executive Vice President, Sage told Enterprise Times when talking about Sage’s commitment to the Armed Forces Covenant. In her podcast, de Rojas highlighted the ability to focus on finding solutions to problems, being self-starters and not having to be constantly managed.

IBM has also developed its own approach to help military veterans transitioning into civilian life. According to Meyrick, IBM matches new hires with existing staff who have served in the same branch of the Armed Forces. This provides them with someone who can mentor them through the vagaries of how a large enterprise works.

There is a perception that solving the cybersecurity skills gap will take years to fill. That perception ignores a number of different groups who can find it hard to get employment inside businesses. Military Veterans and Armed Forces leavers are one of those groups. They are used to working under pressure and are problem solvers. This makes them well suited for roles such as cybersecurity.

At the moment, the programme is celebrating just its 100th graduate from the training. The majority have already found jobs with some still yet to leave the Armed Forces. It will be interesting to see if the success to date leads to an increased number of courses and the involvement of other training providers.