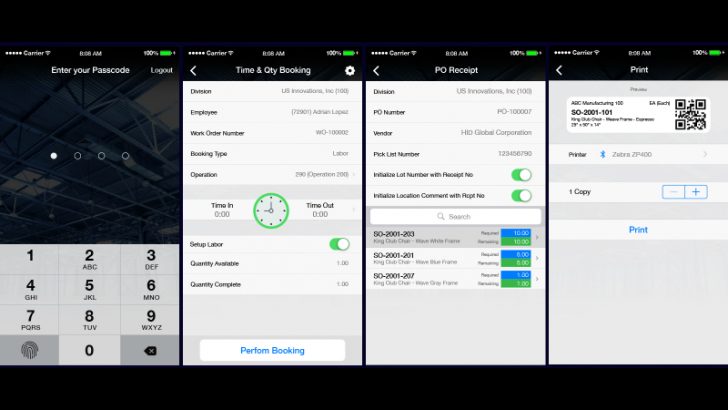 Rootstock has announced the release of RootScan, an app that complements its ERP solution. The app will run on any iOS enabled device although it does not appear to be available yet from the UK iTunes store.

Inventory management at its heart

Mobile devices have delivered increased efficiencies in the warehouse. One of Rootstock’s own customers, Unionwear, has developed a mobile app to assist its shop floor workers at well. This new app appears to compliment that solution and addresses inventory management.

It supports several features associated with inventory management including:

RootScan supports both the camera on the mobile device itself as well as industry standard equipment. The latter allows for the high volume and rapid scanning that a mobile device won’t support.

Rootstock appear to have built this app as a first generation tool. While the press release does not indicate what further versions will contain it has the architecture to support that expansion. RootScan was developed using the Salesforce mobile SDK. This means that the data connection to Salesforce and therefore RootStock data is direct. It also means that the security permissions for users are the same whether they use RootScan or Rootstock on a normal screen

What is slightly surprising is that app is not initially supported on Android. iOS is the second most popular smartphone operating system behind Android. There is also a significant price difference in devices running the two mobile operating systems. It means there is a higher likelihood of Android devices being owned by the workforce than iOS devices.

The app is also in step with the Rootstock release structure. What this means is unclear but one assume that it will get updated in step with Rootstock other releases.

Patrick Garrehy, CEO of Rootstock commented: “We are very pleased to deliver the power of Rootstock ERP literally into the hands of our customers. This new application was born out of our team’s understanding that in order for our customers to stay competitive and profitable, they need the right tools which will not only provide them with greater efficiency, but will also allow them to leverage the technology they already have and in a way that is familiar and recognizable to their employees.”

Rootstock are continuing to invest in their ERP solution. This latest app appears well designed with a user friendly AI. It will hopefully become available on iTunes soon in Europe for the European customer base. Where RootStock will take the app next will be interesting to see. The Unionwear app specifically helps them record piece work on electronic devices rather than paper. This will significantly increase the visibility of the shop floor issues for Mitch Cahn, CEO Unionwear. Whether Cahn will introduce RootScan for his warehouse staff will be interesting to see. Rootstock should also look at the functionality he has developed to see whether they can deliver something for the wider customer audience.