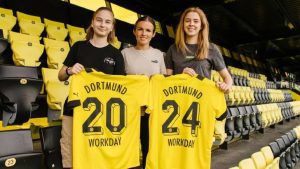 Workday announced a sponsorship deal with Borussia Dortmund (BVB), the 8 time Bundesliga champions and European Champions League winners, in 1997. Last year the club finished second in the league, well ahead of the mid-table finish that TSG Hoffenheim managed, the club sponsored by SAP.

The sponsorship includes both the women’s and men’s teams but does not include a shirt sponsorship, unlike SAP. Workday will also become the club’s official Finance and HR enterprise management cloud partner through the end of the season in 2024. It is unclear whether BVB will deploy the Workday solution to run its business. The business currently uses Microsoft Dynamics. Will it migrate to Workday?

Christopher Knörr, Group Vice President, DACH, Workday, commented: “We are delighted to be teaming up with BVB, a football club that’s not only known for its great talent but also its commitment to its community. This partnership builds on our continued investment in Germany as we commit to grow in Europe. And it is close to our hearts because BVB shares our belief in achieving success through support of its people and collaboration, making the club a great partner.”

A greater presence in Germany

The sponsorship will provide Workday with greater visibility of its brand. The deal includes signage at the club’s stadium, the SIGNAL IDUNA PARK in Dortmund. It will mean that the 80,000 fans and the TV audiences in Germany and beyond will see its logo. Workday will also have a presence on the social and digital BVB platforms.

Carsten Cramer, Managing Director, BVB, commented, “We are delighted to have Workday as a partner that helps simplify everyday work with innovative technology. Our BVB family is of great value to us so by working with an organisation like Workday, which puts its people first, we can continue to drive our team mission of developing great talent.”

In another twist, the deal likely also sees the end of another sponsorship deal with another ERP vendor, Infor. Infor signed up as the new Business Software Partner of  Borussia Dortmund in 2017. Infor is no longer listed as a sponsor by BVB, though neither has Workday been added to the list yet (as of writing).

Workday continues to challenge SAP in DACH and across Europe. The US-headquartered company has over 2,000 customers in Europe, with 40% of the DAX using Workday. It has more than 3,400 employees in the region. Many of these are located at its European headquarters in Dublin. This latest move signals an intent to target SAP’s dominance in Germany. It is a bold move but unlikely to be at the same level of expense as the shirt sponsorship.

The one advantage of sponsoring a champions league side is that the Workday logo will be seen across Europe. It is a clever ploy by Workday and will certainly help with brand awareness across the continent.