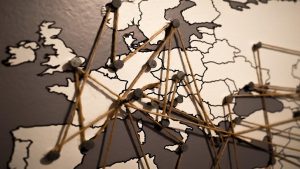 ross-Border Commerce Europe, the platform that stimulates cross-border eCommerce in Europe has released a major research paper. The research ranks the 16 strongest European countries with a focus on their cross-border performance from both consumer perspective and business approach. EU consumers have re-elected Luxembourg as the country winner. Germany was confirmed as the lead EU country generating the best cross-border online shops and marketplaces. UK cross-border sales dropped to a historically low level (-12%) resulting in €29bn cross-border B2C sales online.

The total online EU cross-border market represents a turnover of €171 billion in 2021 (excluding travel), YTD increase of 17%. The study was produced by CBCommerce with the support of Checkout.com, FedEx Express, Lengow, nShift and Payoneer.

The ‘TOP 16 Countries Cross-Border Retail Europe’ edition from the consumer perspective is a major compilation of cross-border data. The ranking is obtained by weighting four parameters:

The climbers are Denmark, Belgium, Sweden, Germany, Italy, France, Finland and Portugal. The one descending is the United Kingdom. The status quo countries are Luxembourg, Ireland, Austria, Switzerland, Norway, Spain and the Netherlands.

Luxembourg scores 1st place for the number of cross-border web visitors, confidence level and cross-border market share. Luxembourg is the clear cross-border eRank country winner. Consumers eagerly ordered cross-border on large platforms such as Zalando, Asos, Veepee, Fnac and Amazon (.de and .fr). Luxembourg has a high share of its population online. According to the country’s Statistics Portal, 97% of households had access to the Internet in 2021. Also, the most recent online purchase was made during the last three months of 2021 for 79% of the population. The most visited cross-border webshops are Bader.de, Maisonsdumonde.com, Auchan.lu, Hunkemoller.lu, Rueducommerce, Alternate.lu, Next.lu and Zooplus. 40% of cross-border purchases are clothing, shoes and accessories.

Belgium scores well in terms of consumer confidence in online cross-border e-commerce. However, this is not yet spontaneously converted into cross-border purchases. Belgium accounts for €5.5 billion. An increase of 37.5% compared to 2020 – of cross-border sales for a market share of 35.5%. Across the border, Belgians mainly buy on Zalando, Zara, Asos, Boohoo, H&M, Amazon, Wish, Shein and AliExpress. As well as from their northern neighbours Coolblue and Bol.com.

France went up from eRank 13 to 12, jumping one position. The cross-border market share of total online purchases stabilised at 20.4%. In absolute cross-border sales figures €23 billion. Over 2021, e-commerce growth in France was tremendous. The main reason is the extension from some big native French webshops to marketplaces. This included Fnac, Carrefour, La Redoute, Nature et Découvertes, Conforama. However, also fast developing vertical marketplaces such as ManoMano.

The UK as TOP 14 cross-border country

The UK with eRank 14, went down 10 positions due to the Brexit. The lack of confidence and fewer cross-border visitors generated a 12% lower turnover, resulting in €29 billion.
Brexit has a negative impact on cross-border trade to and from the UK. UK customers lost faith in cross-border commerce (-35%). For eCommerce sellers, Brexit basically means more bureaucracy and tax. The operational and logistical headaches Brexit is causing for eCommerce retailers of all sizes, and across all sectors. Rising shipping costs, delivery delays, new regulations, and increased paperwork are posing unprecedented challenges for EU e-tailers selling to UK customers and vice versa.

The Netherlands as TOP 16 cross-border country

The Netherlands was last in eRank, the country only has a cross-border market share of 15.9%, representing €4.8 billion. The main reason for this is the large selection of strong native Dutch webshops such as Bol.com, Coolblue, Wehkamp. AH. Zalando is the country’s favourite fashion cross-border online platform.

In 2021, Germany with 84 million inhabitants, reached eRank the number 1 position with cross-border webshop champions. This included brands such as Hugo Boss, Hello Fresh, Zooplus, Zalando, Lidl, About You, Adidas and Westwing. Germany holds 112 cross-border webshops in the TOP 500, the UK has 74. Germany is the leader since many cross-border webshops, from which nine are marketplaces and 55 (49%) are pure players.

Sweden, with 44 strong cross-border webshops in the TOP 500, relies heavily on its fashion retailers with H&M Group. Their expansion demonstrates that an online cross-border expansion strategy successfully outperformed new store openings. Pan-European companies like Inditex, Richemont, Kinnevik, Heartland, Signify, Mulliez, Otto, Schwarz, LVMH and Nestlé are drivers to European cross-border eCommerce. Due to the store closings during the pandemic, multichannel retailers increased cross-border trade. In addition to direct-to-consumer brand manufacturers (DTC) such as Philips and Lego.

“It makes the best European countries in cross-border eCommerce transparent. It can also stimulate the entire retail industry,” says Carine Moitier, the founder of CBCommerce.eu.

There were no surprises from the research which details the impact of Brexit on UK cross-border shopping. As expected, leaving the EU has created additional paperwork, new regulations, increased shipping costs and delivery delay. Hence the massive drop in cross-border sales. This is all a shame. The country has a high internet penetration rate, fulfilment centres and technical infrastructure. All the core infrastructure ingredients to support international cross-border commerce.

Blockchain Charles Brett - June 20, 2022 0
This is Charles Brett's start-of-the-week Enterprise Times ‘blockchain catch-up’ 2022-Week 24. Necessarily it is idiosyncratic and selective. It is not intended to be comprehensive but...