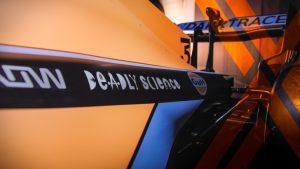 Smartsheet announced its sponsorship of the McLaren F1 team last November. The work management team has now announced that it will use that sponsorship to further the support of non-profits and changemakers across the world. At the Australian Grand Prix on April 8th-10th, it will relinquish its advertising spot on the McLaren MCL36 race cars for DeadlyScience as part of its Sponsor X initiative.

The intent is to promote the Australian non-profit that works to provide remote communities in Australia with STEM resources and mentoring. Since its founding, DeadlyScience has provided more than 25,000 books and 700 telescopes to more than 180 communities across Australia.

Corey Tutt, founder and CEO, commented: “DeadlyScience is a small team with a big mission: to introduce STEM education to kids who have so much potential, but just need someone to believe in them. It means the world for Smartsheet to donate this sponsorship and believe in the important work we are doing. When the kids see DeadlyScience on the car, they’re going to know it represents them.”

The first of its kind, the Smartsheet initiative could change how other vendors use their F1 sponsorship deals. It will put a worthy cause onto millions of television screens worldwide.

The Sponsor X program enables the non-profit to take advantage of the advertising space. It will also receive Smartsheet licenses, consulting hours and training at no cost. The work management platform will help improve its teamwork and collaboration to have an even greater impact. Smartsheet has created a template for Sponsor X that will see it repeated across other F1 races through the calendar.

The innovative approach to F1 sponsorship is welcomed by Zak Brown, CEO of McLaren Racing, who said: “Smartsheet has revolutionized how we do business, and now they are doing the same with how they are activating their sponsorship; it’s leading edge for Formula 1. McLaren is proud of the work DeadlyScience is doing to inspire a new generation of scientists. Sponsor X is a bold way of pursuing progress–an idea that resonates with everyone at McLaren.”

CEO of Smartsheet Mark Mader said: “Driving meaningful change requires serious commitment, bold action and a platform that anyone can use to make a difference. That’s why we launched Sponsor X. At Smartsheet, we believe in helping create a world where anyone can thrive.

“Pursuing social progress anchors us in a greater purpose. We are so impressed by the work Corey and DeadlyScience are doing with children all over Australia. They are a remarkable representation of the impact we hope to make when we use our voice and resources to amplify changemakers around the world.”

Donating one of its key advertising spaces to a non-profit is a generous gesture. With photographs and TV showing the logo worldwide, DeadlyScience will hope that raising awareness of the charity will improve donations, enabling it to fulfil its mission.

It will be interesting to see whether other sponsors, especially software vendors, copy this initiative. Smartsheet has once again shown that there are new ways of making a difference through Sponsor X. What will be interesting to see is what other non-profits it supports in the future through the program. DeadlyScience is a very local Australian non-profit. Many others have more of a global reach and will have a greater affinity with the F1 global audience.