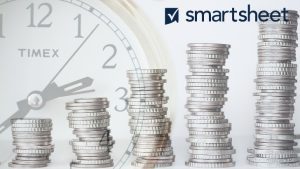 The significant difference in this report is the scale of the customers involved. Forrester interviewed nine customers, only one of which was less than $1 billion in revenue. All were Global companies though most were headquartered in the US.

The report itself consists of five sections and two brief appendices. It starts with an executive summary which delivers the highlights of the report. There is then a section on the composite organisation, the challenges the component organisations faced before deploying Smartsheet. The final three sections are the meat of the report and analyse the benefits, then costs and a financial summary.

At six pages, the executive summary is long. It contains the report’s key findings. These include the quantified benefits of deploying Smartsheet:

The unquantified benefits are:

Finally, it lists the costs factored into the calculation of ROI:

It is impressive, but Forrester adds a caveat, “Forrester makes no assumptions as to the potential ROI that other organisations will receive.”

While the executive summary mentions the challenges, the next section expands this. It highlights how companies are working before implementing a work management solution. As this was not a wide survey, no extensive quantitative data support the findings. However, the three most common challenges identified were:

As usual, there are some questions about how Forrester calculated the benefits. It estimated an employee base of 20,000, Smartsheet users at 1,000 after three years and the average PS engagement as $125,000. It would have been useful to understand each component organisation’s figures. The reader could then see how these figures are calculated and whether an outlier impacted them.

While the figures indicate a ramp up each year, it is unclear whether the organisation has already completed the implementation process or is a mature product user. With user numbers increasing each year, the inference is that the product usage is mature in year one and therefore achieving ROI in less than six months is potentially flawed.

However, Forrester used the information provided by interviewees and had access to data from Smartsheet itself. However, it does not detail which values were calculated from Smartsheet or the interviews. Those savings are significant and, for larger organisations, show the value of deploying a work management solution like Smartsheet. Forrester has identified all the obvious benefits as well.

Should they be believed?

Unfortunately, more detail behind some of the figures would be useful. Organisations need to be careful to assume all figures will apply to them. For example, the Software cost savings of $1.1 million is based on what? What tools are removed from use? Does that include Excel, which may have other purposes?

The estimation of increased revenue delivery is very hard to ascribe to Smartsheet, though the authors have surfaced how they calculated it. The figure could be higher or lower. The most notable justification is one customer’s comment, though.

One interview noted, “We are seeing increases in our repeat business. Our customers want their projects to be run with the methodology that we have devised because it is simply better than their own. This has actually resulted in a revenue increase because (customers) are more than willing to purchase our project management capabilities after having such a positive experience with them.”

That increase could be attributed to a combination of the change management around the methodology and Smartsheet, which would be hard to quantify. However, both are probably needed.

On balance though, the numbers broadly stack up. Even if they don’t, the benefits are clear for any organisation

This is a solid TEI report. It is better for having data from larger organisations. While there are still questions over the calculations, the benefits of Smartsheet are clear. While not every organisation can guarantee the ROI suggested, they should certainly gain the benefits described.

This is recommended reading for anyone writing a business justification for deploying a work management solution. A professional services leader can plug their numbers into the calculations and quickly identify whether moving to a more modern solution is worth it.