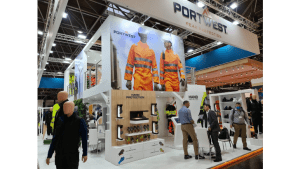 Portwest has gone live on its third iteration of an Infor ERP solution. This time the successful workwear manufacturer and distributor has deployed Infor CloudSuite Fashion in a multi-tenant cloud deployment hosted on Amazon Web Services.

The project follows on from the successful deployment of Infor CloudSuite M3 in 2015. This was a single-tenant cloud deployment on AWS and an upgrade from its previous on-premises deployment.

Paul Forry, head of information technology at Portwest, explained the evolution further, saying, “Our use of Infor has evolved as we have grown, from Infor M3 ERP on-premises through to M3 single-tenant cloud, and now the multi-tenant Infor CloudSuite because it has been a path of ever-increasing returns.

“This move to multi-tenant Infor CloudSuite also helps us address issues in the movement of our stock and forms a foundation for plans in the coming months to ensure standardized processes in our acquisition targets.

“We have aggressive plans to become a £1 billion company by 2025, and acquisitions and increasing our salesforce are going to be the main engines of that growth. We are also undertaking a deep examination of our customer profiles and looking at how we can diversify to sustain our double-digit growth. Infor CloudSuite will be at the heart of all of these initiatives.”

The effort for Global Standardisation

The latest update will help Portwest create standardised processes across its global facilities. These facilities now include the United Kingdom, USA, Ireland, Poland, Dubai, Australia, Myanmar, China, Bangladesh, Italy, and Albania. In the last two years alone, Portwest has grown at 24% per annum and now manufacturers more than 1,800 products and has 35,000 SKUs. The latter figure is nearly quadruple its SKUs in 2015.

Since 2015 the company has grown significantly, opening locations in China and investing in Italian workwear manufacturer Base Protection in March 2020. This added the Italian and Albanian manufacturing operations to the standardisation program.

Enterprise Times asked, is Base Protection part of the rollout plan? Forry replied, “The 2022 project for BASE includes their HQ in Italy and their Factory in Albania. M3 will be replacing several custom applications.”

The plan also appears to include a rollout to Bangladesh and Myanmar. Bangladesh was originally noted as part of the original 2015 project but is still not part of the immediate plans, according to Forry. It will be interesting to see when it rolls out. AWS supports Bangladesh but does not have a region located there yet.

One area where Infor has assisted Portwest to standardise is the implementation of EDI. Portwest is using the EDI capabilities of CloudSuite to collaborate and interact with suppliers and customers securely and consistently. This has helped also standardise its document management across the group. It now has common formats for pick sheets, invoices, order confirmation, statements, and dispatch notes.

The latest iteration of CloudSuite Fashion will enable Portwest to use internal invoicing to track the movement of internal goods and many any intercompany financial transactions related to them. It should also help with the assimilation of future acquisitions.

While this is the third implementation Portwest has carried out with Infor, it did not mean it was straightforward. Enterprise Times asked Forry some questions about the implementation, which took 11 months and was completed in September 2021. Portwest carried out most of the work with Forry, noting that they were supported by Infor professional services and an Infor partner.

In theory, moving from a single tenant to multi-tenant deployment sounds simple. Enterprise Times asked Forry what the biggest concern was and how they overcame it?

Forry replied, “The SQL changes we were making to our data. Overcome by testing, testing and even more testing until we were sure all obstacles were overcome.”

While the standardisation and ability to assimilate acquisitions are two reasons for deploying the multi-tenant solution, were there any cost benefits?

Forry noted: “Not really, if anything our costs have increased significantly. The main driver for this project was increased efficiency and increased functionality.”

Besides rolling out to Base Protection Portwest also intends to deploy an integrated business intelligence and analytics solution. This will enable Portwest to benefit from the single data lake that the Infor CloudSuite solution provides. It will give the leadership visibility of consistent data and metrics from across the business without the need for data consolidation. It also plans to introduce automation, presumably using Infor WMS at its UK warehouse initially

Anwen Robinson, Infor general manager and senior vice-president for UK & Ireland, commented, “Portwest is a textbook example of how moving from ERP to multi-tenant Infor CloudSuite can enable, accelerate and sustain substantial growth.

“From establishing improved processes to reducing costs by retiring legacy technology, and accelerating the onboarding of acquisitions, Portwest has demonstrated repeatedly why it is not only beneficial to harness the power of cloud technology, but that to drive growth, it is a necessity.”

That Portwest has reinvested into Infor technology is an indication that it trusts the ERP vendor. It also believes that it will continue to help the company grow. Fashion is one of the verticals that Infor has had success in recently. In Europe, it has seen several high-profile brands implementing its software. Recent deployments have included OFFICE, Lancel, and Mattex.

Making a move to a multi-tenant deployment makes sense. It helps standardise processes and data for further analysis. Furthermore, the business can rapidly roll it out to new locations, maintaining corporate standards and allowing for localisations. The key for Infor is that Portwest is not only an advocate of its solutions. Infor is also part of Portwest’s success. Something that other companies will take note of.