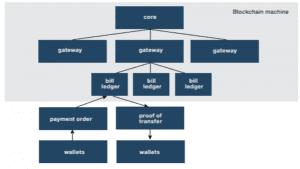 Alongside the European Central Bank (ECB) and seven other euro area central banks, Eesti Pank carried out a research project into the technical possibilities for a digital euro. The experiment established that a blockchain-based solution could support the processing of almost unlimited numbers of payments.

This could, therefore, support a very large money supply with a smaller carbon footprint than existing card payments systems. As important, for central bankers, such a blockchain-based solution could balance privacy and the need to meet anti-money laundering requirements.

The institutions involved in working with the ECB on this research project included the central banks from:

The ECB-led experiment and scope

The objective was to assess one technical solution for the digital euro. The experiment looked into:

If the ECB was to pursue e digital euro, it would not replace cash. Instead, it would provide an alternative that could operate in parallel to cash  – for citizens and businesses. As with cash, the central bank (presumably the ECB) would guarantee the value of such a digital euro.

The experiment saw payments made in digital money between people with digital identities from Estonia, Latvia, Lithuania and Spain. Performance test results demonstrated:

Such results would seem to indicate that a conceptual ECB digital euro:

Among broader conclusions from the technological experiment were:

As mentioned above, the experiment involved integrating the Estonian and Spanish eID systems and certificates. The CBDC system exchanged €-CBDC tokens in peer-to-peer transactions both within one single jurisdiction and across two EU countries. This exercise showed, with caveats, that eIDAS-compliant eID solutions and certificates could:

The results now provide an input to the ECB’s Project Investigation Phase on the digital euro. This ECB Phase will:

Programmable money is digital money that a holder can programme to make conditional payments for a set purpose. For example, governments might use a digital euro to support an economy during a pandemic in completely new ways. By issuing a digital euro to citizens, even to arriving tourists, it might impose a requirement that spending them was only possible for approved services (say to support the tourism sector).

A digital euro would almost certainly further the digitalisation of Euro economies. It could lead to programmable money as well as reduce the cost of making payments (the latter almost certainly being of greatest interest to citizens and businesses). That an existing, and proven system (the Estonia use of blockchain) can work could be a significant accelerator. T

he demonstration of the integration of existing eID systems cross border within the overall blockchain approach is another accelerator. Despite the EU and ECB normally working with extreme care (resulting in slowness), some form of digital euro might arrive sooner than you think.