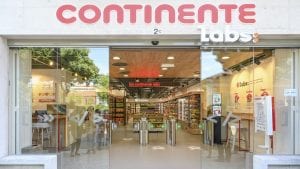 The company says it is consolidating its position as the leading European provider of autonomous retail. Autonomous retail enables stores to be scan and queue free. This is the first autonomous store to open in Europe. Two others were recently opened by a US retailer in the UK.

Continente, the largest food retailer in Portugal, part of Sonae group, has opened Continente Labs. It is the company’s first autonomous store, powered by Sensei’s autonomous technology solution. Shoppers can enjoy a frictionless and seamless shopping experience. Guests in store download the Continente Labs App, which acts as a digital payment method. The app generates a QR code that enables users to enter the store, pick their items and leave. The technology only takes a second to interact with on entry and is then seamless for the user. Once shoppers have selected their items, they can simply exit the store, eliminating the need for queuing and payments. A digital receipt is then received in the app almost immediately after purchase.

After a challenging year during which people avoided crowded spaces and instead opted for virtual shopping experiences for safety reasons. Enticing people back to physical stores is a challenge for the retail sector. As a result, autonomous stores are more relevant than ever. Meeting consumers expectations of contactless experiences, time-saving and convenience while providing an experience free from any hassle.

Innovating through a close collaboration

The store opening is a milestone for both Sensei and Sonae, whose collaboration has delivered this innovative format. The company says the integrated system developed by the tech company allows store operations to be more efficient. It brings the benefits of digital efficiency into the brick and mortar store, augmenting the physical experience with digital seamlessly. Staff also have tools at their disposal to analyse shelf inventory and replenishment act on it with real-time insights.

The future has arrived

Sensei’s technology relies on an integrated system that blends cameras, sensors and AI algorithms. Together, these elements enable the automation of both new and existing stores, providing a fast, convenient, and seamless shopping experience.

Consumers’ movements are tracked as they add or remove items from their shopping list. The virtual basket is updated in real-time as the product is picked or returned to the shelf. Shoppers can rest assured their identity remains anonymous while shopping. Privacy is completely respected while no biometrical or face recognition are used.

Vasco Portugal, CEO and co-founder of Sensei, addresses this as “The store of the future is a concept of the past, as we’ve just set autonomous retail as a reality. We are proud to enable a completely transformed experience for both customers and retailers. Anyone who is seeking better use of their time, convenience and business optimisation. We’re thrilled to partner with such an experienced retailer as Sonae. To count on their trust to pursue a path of pioneering innovation within the sector.”

“Since we met Sensei at the end of 2018, we have been extremely excited and committed to together rethink the store shopping experience. It has been a pleasure and a constant learning process for both sides, having solved complex tech challenges and continuously improved our business processes. The opening of this store marks an important milestone in what we are sure to be a long and fruitful partnership between both companies”, said Frederico Santos, Director of Innovation and Digital Transformation at Sonae MC.

Retailers should know that outstanding service and seamless customer experience are key to business success. Shopify, Amazon and other companies have all recently opened autonomous retail outlets in the last few years around the globe. Autonomous retail took off during the Covid-19 pandemic. Analysts believe it will only getting bigger. When Amazon launched its autonomous retail to the public with its Go concept in 2018, there was no headlines about the death of retail. Yet consumers were experienced in mobile shopping and contactless payments, cashier-less stores on the high street are the norm.

It is just surprising that autonomous retail is not more prominent. Any location where shoppers valued time and convenience should be ripe locations for such stores. High-traffic convenience stores, gas stations, train stations and airport kiosks would be top of such lists. The long-term impact of Covid-19 on retail stores is yet to fully reveal itself. 2020 accelerated retailers needs to redefine the purpose and experience of the store. In addition, deepen the integration with rapidly changing digital ecosystem that customers engage and shop within. Look forward to other online merchants going down the autonomous retail route. This is definitely the future of retail.