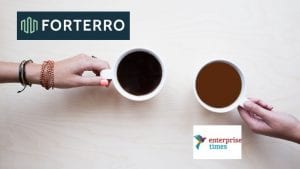 Dean Forbes was recently appointed CEO of Forterro, although he will not formally take the position until March 1st. Enterprise Times had the opportunity to talk to him before becoming immersed in the role at a company that funding from Battery Ventures has built over the last couple of years. While Forterro is not a well-known brand, it has acquired several European vendors over the last couple of years. The largest and probably best known is ABAS which was acquired in 2019. Enterprise Times first asked Forbes for a 30-second pitch for Forterro.

Forbes replied: “Forterro is a group of manufacturing specialist ERP software companies that have been acquired under the Forterro group, and then invested in to grow to serve lower to mid-market manufacturing organisations.

“The brands are located in Sweden, Poland, Germany, France and Switzerland, so why pick a UK based leadership team. The previous leadership team was based in the US, in the same time zone as Battery Ventures.

“Because there actually is any place where you could have based the leadership team you could argue it makes slightly more sense to be in one of the countries with operations. But they expect over time that, as the business grows, it will diversify even further geographically to include the UK. That’s part of the thinking.”

Does working from the UK give a degree of neutrality towards the other countries?

“To be honest, not really. It wasn’t about neutrality from the existing businesses because the business is so distributed. The leadership team could almost be anywhere. It’s better that it’s in Europe, as opposed to the US for timezone and cultural reasons.”

Why did you take the role?

“Personal reasons because I’ve been very, very fortunate. I’ve now done three great projects, all with really good exits for investors, with a cumulative value of a billion euros. I think this has an extremely high potential to be north of a billion euros in a very short time. It’s a great project. It has all the hallmarks I like, plus some. I’m turned on by the value creation potential.”

If Forterro is aiming for a billion, what is the current value?

“There’s some solid degree of work to get to that billion in the near term. It is what I want to do as quickly as possible.”

What are your objectives?

“It’s a really good business. It’s run very, very well. I think we can work with the leadership teams in those countries to improve it slightly. Increase the focus on the cloud and continue to do good acquisitions that can help the company grow.”

“Absolutely, the deals we’ll do in the next twelve to eighteen months will be European unless something amazing pops up in the US or Asia Pacific, but I doubt that. I expect us to stay European focused.”

Will Battery Ventures provide additional funds for Sales and marketing and more acquisitions?

“That’s the amazing thing about this business. It can do both. It’s very profitable, it’s very cash generative and it’s not highly leveraged. So, there’s an opportunity to do more acquisitions, and there’s money there to invest in products, sales and marketing, the degree to which that’s the clear and obvious thing to do.”

On the near future

“Well, in the next 18 months, we expect to increase EBITDA significantly and get top-line organic growth into double digits.”

Forterro has kept its brands and solutions separate to date. That appears to be a deliberate strategy when they bought these vendors. Will you look to evolve that and remove some of the duplication of effort across the group?

“I’m certain that there are opportunities to bring the businesses closer together and get some of the efficiency and EBITDA gains I just mentioned from doing that. That’s a very, very delicate topic because the strength of the business today is in its country and vertical specificity. So yes, we want to bring them closer together, but I don’t want to harm what has clearly created a lot of value and been very successful to date.”

It’s probably early days to ask you how you’re going to develop the different brands’ synergies.

“Yeah, we’ve got some ideas. There are a few things that we’re kicking around. But, I haven’t talked to the teams about the potential for those things yet. So it would be premature and wrong for them to read about it?”

Are there common routes to market within those different brands?

“It’s pretty much a direct sales organisation because they’re specific for manufacturing. They’re all well known in their industry, well known among their current customer base and desired customer base. I think that’s another thing that we might be able to move on.”

Which is the key brand Forterro, or the product brands and will that change?

“Well, today, the product brands. It depends on the degree to which we can bring the businesses together. If that can happen in a meaningful way, perhaps. If it can’t, then we won’t.  But I’m not precious about it. I don’t think there’s a sharp desire to get to a place where there’s only one brand in X period of time.”

What do you see as the competitive market? And how do you see it evolving in 2021?

“ERP  is one of the oldest technology categories out there so it’s highly competitive. But there is only a handful doing it well. There are the international players who are all matured in the crowd, which is interesting. Then you have the local players who are mostly on-premise. Our game will be to evolve into the cloud and nudge ourselves closer to the international space. How quickly and to what degree, as I mentioned, that remains to be seen.”

The current solutions are mainly targeted at process and discrete manufacturers. Is the plan to keep that focus or extend it out to some other manufacturing sectors as well?

“I think we will remain focused on the current aperture with the current businesses. If we do acquisitions, we may look to service different types of manufacturing plants by acquiring businesses that are good at and already doing it.”

“The challenge is going to be bending the curve of reality that is ERP. That sector grows at a certain pace, and we’ve got to grow significantly faster than the sector itself. That would be the main challenge.”

Is there a Forterro culture at all?

“The culture that I’ve observed so far is a very high-performance culture, a very good business. But to the point we discussed earlier, I am interested in how much acceleration can be gained by better sharing between the different businesses and countries. That will adjust the culture slightly as we de-silo these businesses a little bit and get them sharing information, best practice and perhaps resources, and get some efficiency and acceleration that way.”

You will shortly have 1200 people working for you. Do you have a message for them as the incoming CEO?

“I’ve been frantically calling through the senior leadership team. The message I’ve given them is that we do want to pick up the pace. We want to accelerate on the top and bottom line. The things that we’re going to do to make that happen will be decided on in a collaborative and consultative way because these businesses are so specialised and so strong.

“I’m really just looking forward to getting around the table with them and figuring out what I’ve learned and done in my recent career can be added to work they were already doing successfully in the different regions.”

What about the grassroots employees?

“I am looking forward to learning from them because this is a new category for me as well.  I have been in and around enterprise technology all of my professional career. Anywhere I’ve been, and we’ve been successful, it has always started with a fairly lengthy consultative period of observing and learning what’s happening today. How’s it done? What’s done well? What results do we get by doing those things before you start tinkering or changing things? I’m looking forward to sitting with them and learning.

“At Core HR, the thing that created the most value in the business, by the time Access bought it, was something that an engineer in the smallest of our four locations explained to me just in passing in the first 90 days I was there. It became the thing that created hundreds of millions of Euros of value For customers. I’m a product guy, I’m super interested in product, and that will be a place where we put in a lot of focus. Software companies win and die on the quality and capability of their products. So that is a place I’ll be spending a lot of time.”

That comment was reminiscent of one of Forbes mentors while he was at Oracle, Charles Phillips. Phillips was also a “product guy”, and Forbes clearly admires the philosophy.

“It Shoe Dog by Phil Knight (UK, US, AUS, DE, FR, SE). It was really good. I’m a fan of Nike. I think it’s a great brand with really good values, and that is a long journey with lots of pivots in it, which I liked. I’ve done transformational stuff all of my career, where you have to take a business in a different direction. I don’t think we appreciate how many times Nike has pivoted as a business.”