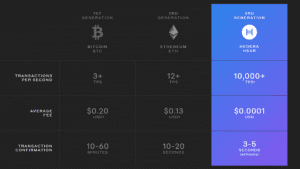 Hedera Hashgraph is delivering on significant milestones – achieved during the first year of availability of open access of its network (in September, 2019). With use cases in advertising, healthcare and pharma (and more – see below) it has seen an average of 750K daily transactions during the past 12 months – rising to >1.5M over the past month.

“We are thankful to the Hedera community as we complete year one of our 100-year journey,” said Leemon Baird, co-founder and Chief Scientist of Hedera. “None of this would be possible without our committed developers, advocates, ecosystem partners, and Council members. We make it our mission to enable you, as simply and efficiently as possible, to leverage Hedera Hashgraph as the trust layer of the internet. While there is much work to be done, we are proud of what this community has accomplished in just a mere 365 days, and are excited to build on this growth in the year to come.”

Hedera says it saw multiple applications go live, even though its network became openly accessible a year ago. New applications have launched over those twelve months.

These enterprise-grade applications are delivering in areas such as:

They use Hedera’s primary network services – Hedera Consensus Service and its cryptocurrency service. The 750K average transactions per day is almost the same as the Ethereum network (and almost 20 times as many as Ethereum in its first year).  Over the past month, the network processed almost double those of Ethereum.

One reason for the growth may be that, unlike other public decentralised networks, Hedera Hashgraph’s network fees do not fluctuate significantly as network usage grows. The Hedera Hashgraph transaction fees are:

The exchange rate between fiat and HBAR aggregate from multiple sources. They update regularly to reflect current market rates. Such an approach:

Over the past year, Hedera has seen many providers add Hedera’s cryptocurrency, HBAR, to their ecosystems. This has enabled greater access for developers and others wishing to exploit the cryptocurrency for network activity. As of September 2020, 47 on-ramps — including exchanges, software and hardware wallets, OTC desks, and those that provide the infrastructure to purchase HBAR, but don’t enable purchases directly — have added HBAR to their list of supported cryptocurrencies. (A list of wallets, exchanges, and on-ramps can be found here.)

In addition, systems integrators have completed or are developing projects. These include:

As for standards, Hedera has contributed where the usability and interoperability of a distributed ledger ecosystem matters. For example, Hedera:

Hedera has also published its roadmap for the immediate future. This includes:

As explored elsewhere in Enterprise Times, Hedera Hashgraph offers a decentralised public network. Developers can use this to build secure, fair applications with near real-time finality.

Hedera has a broad participation/ownership which includes:

In overtaking Ethereum within 12 months it has demonstrated credibility as a platform with an ecosystem. That said, 1.5M transactions/day pales when compared to Visa’s more than 100M transactions/day.