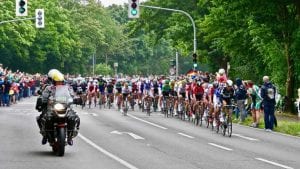 There are few events bigger in France than the Tour de France. Time trials, mountain stages, long flat stages in weather than can change from baking hot to driving rain, the riders dig in to claim one of the famous jerseys available to them. But this is not just about the grit of the riders, it is also about the technology.

Technology pervades the Tour de France. When you look at the technology invested in the bikes, rider and the vast volume of analytics carried out, there are few sports, except for motorsport, that can rival it. But the technology is not just for the teams.

Fans, those who physically follow the riders and those at home, also want to know what is going on. How is the rider or team they support doing? Are they under or over-performing? Will they win a stage, a jersey, the Tour de France itself?

NTT Ltd provides the data and analytics for the Tour de France to the riders, journalists and fans. With COVID-19, it has announced plans for a revamp of its fans services.

Ruth Rowan, Chief Marketing Officer, NTT Ltd. commented: “This is not just a first for the Tour de France, but a first for sport; everything we would previously have done physically has been moved to a remote environment. Sport has the power to inspire and we wanted the public to enjoy the race this year even if they can’t be at the roadside. Our work with ASO has shown how, when we work together, we can find solutions to do great things. Innovation means fans will see the race in a different way, actually get closer to the action and more people than ever before can enjoy it safely.”

What is NTT Ltd delivering?

NTT Ltd has partnered with the Tour de France for several years. It’s using historical data and real-time data gathering during the race to power five new experiences for fans. They are:

A brand new Augmented Reality Data (AR) app: Fans will get a 3D visualisation of the event and access to the live data. It’s not yet clear if this will extend to the use of 3D goggles during the event. For ardent cycling fans, however, they can watch while cycling at home and believe they are part of the race.

Additional data for live television broadcast: New data streams will be provided to the TV broadcasters to give greater insight to the performance of each team.

The @letourdata social channel: This will let fans monitor closely what is happening with each cyclist, team and the overall race. It will also draw data from the NTT Predictor as to where the cyclists and teams are likely to finish.

The official ‘Tour de France Fantasy’ game: Fans can compete with each other using real data from the race.

The Tour de France Race Center: Race 2.0 is a complete overhaul of the live-tracking platform NTT Ltd already provides. It now has a second screen experience with live telemetry, predictions and commentary.

Rowan commented: “The approach we are taking at the Tour de France this year will revolutionise how sporting events are delivered in the future. We are using technology to take the fan experience to the next level. The new challenges we’ve addressed in preparing for this year’s race are inspiring our team to develop many more fantastic ideas to attract a new generation of digitally savvy fans.”

Sporting events are big business for technology companies. The thirst for information from fans who want to get closer to the action requires the use of data and innovations in technology. Of the new features NTT Ltd has announced above, the AR option sounds the most interesting. Keen cyclists who already use apps to simulate stages of the Tour de France in their home gyms, can now don a headset and join their heroes on different parts of each stage.

The question here is, where will NTT Ltd and ASO, the company who organises the Tour de France go next? The rise of eSports, most notably around Formula 1 this year, has been hugely successful. Is there a place on the eSports calendar for a virtual cycling tour? If the AR works, there is no reason why this couldn’t happen. Elite club riders would jump at the chance to compete with professionals and, as has been seen in other sports, it would allow teams an opportunity to take a look at gifted amateurs.

It will be interesting to see how cycling fans take to the new offerings that NTT Ltd is providing. Will they embrace the AR? Will the new fantasy game be an instant hit? What will fans demand in future in terms of innovation and more data? By the time the riders get to Paris on September 20, the verdict from fans will be in.