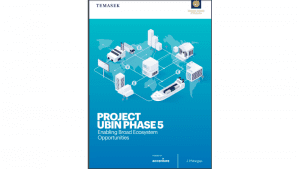 The Monetary Authority of Singapore (MAS) and Temasek have released a report to mark the successful conclusion of the fifth and final phase of Project Ubin. The report ‘Project Ubin Phase 5: Enabling Broad Ecosystem Opportunities‘ provides technical insights into a blockchain-based multi-currency payments network prototype. It describes how the network might benefit the financial industry and blockchain ecosystem.

Mr Sopnendu Mohanty, Chief FinTech Officer, MAS, said, “As with all innovation adoption, there is a time for experimentation, and a time for commercialisation. Project Ubin has worked with the financial industry and blockchain community on a journey of experimentation, prototyping and learning. This has built a strong foundation of knowledge, expertise and experience, and paved a path towards commercial adoption. Following the successful experimentation over five phases, we look forward to greater adoption and live deployment of blockchain technology.”

The report, commissioned from Accenture, examines:

The key findings of the report include:

In the latter case settlements occurred with:

The MSA says that these benefits were validated through workshops conducted with more than 40 financial and non-financial firms engaged in Phase 5 of Project Ubin. Mr Chia Song Hwee, Deputy Chief Executive Officer, Temasek, said, “Blockchain technology has great potential in transforming businesses and opening up new business opportunities. Phase 5 of Project Ubin has demonstrated the commercial applicability, viability and benefits of blockchain technology across industries, beyond capital markets and trade finance. This validates Temasek’s efforts in exploring and building blockchain solutions focusing on digital identity, digital currencies and financial asset tokenisation. We look forward to supporting commercialisation efforts emanating from Project Ubin and other application areas, with a view to drive greater adoption of blockchain technology.”

The payments network prototype, developed in collaboration with J.P. Morgan and Temasek, is (in MAS’ analysis) sufficient to serve as a test network to facilitate collaboration with other central banks and the financial industry. The end objective is to develop a next generation cross-border payments infrastructure.

Technical specifications for the functionalities and connectivity interfaces of the prototype network have been made publicly available to spur further industry development.

Phase 5 was the final experimental phase of Project Ubin. It focused on proving the foundation for future pilots and trials by the finance sector. In continuing the work done in Phase 4, it developed a blockchain-based multi-currency payments network. This enables payments to execute in and across different currencies on the same network.

Although a prototype test network, Project ‘Ubin V’ developed to a high level of production strength by:

The two workstreams subsequently merged for connectivity and integration testing. Mr Umar Farooq, Managing Director & Head of Blockchain, J.P. Morgan, said, “J.P. Morgan is a leader in building commercial solutions using blockchain technology.  We have been an active contributor to Project Ubin since its inception, leveraging our learnings and infrastructure including Quorum, Interbank Information Network (IIN) and JPM Coin.  Phase 5 has demonstrated how broadly blockchain technology can impact the future of business and we look forward to working with MAS, Temasek and other banks to develop and scale commercial solutions for the industry.”

As part of the technical development workstream, J.P. Morgan leveraged the Quorum platform (an enterprise-grade blockchain). Quorum’s production-grade capabilities – developed as part of the Interbank Information Network (IIN) –  and its JPM Coin product provided a simulation which the MAS and Temassek believes is close to real-world needs. It was this, they assert which enabled an ‘appropriate’ environment for industry-level testing.

The result of the technical development workstream was the successful development of the production-ready ‘Project Ubin V’ payments network. Project Ubin demonstrated that payments can be carried out in different currencies on the same network – a prerequsite for acceptance into the financial services arena. Finding out whether adoption by the latter will happen is the next step.