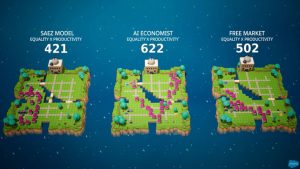 Tax is one of those contentious subjects that will always spark debate. Is it fair? Who is paying too much? How is it used? Why don’t governments crackdown on tax evasion? It is one of the few subjects than span the political divide with everyone having an opinion and nobody having the right answer.

Salesforce has decided that there is a better way to create tax policies that work for everyone. It has released the AI Economist which it describes as: “a new way for governments, economists and others to improve the design of economic policies for fairer and more prosperous societies.”

The press release gives a longer explanation of what this means. “In short, this AI will help inform tax policies that might not only bring greater equality and welfare outcomes across the population, but also predict how people would actually respond to a tax policy – such as whether they might be inspired to work more or less as a result.”

There is no country in the world where the tax system is seen as fair. Tax systems evolve over time and are incredibly complex which is one of the ways they create inequality. One of the problems that governments struggle with is how to model the impact of changes to tax legislation.

The authors decided to take a different approach to economic simulations. They write: “We propose a two-level deep reinforcement learning approach to learn dynamic tax policies, based on economic simulations in which both agents and a government learn and adapt. Our data-driven approach does not make use of economic modeling assumptions, and learns from observational data alone.”

To achieve this the authors offer four main contributions:

Traditional economic modeling takes vast amounts of data and compute resources. The AI Economist changes the approach by using gamification. Think of it as Sim City on steroids. In a video, it explains how its AI agents represent different roles in society. It also uses multiple simulations and models to see how the AI Economist performs against those models currently used by governments.

One challenge is plotting a line between productivity and taxation. Too much tax and productivity drops. It sounds simple but the reality is far more complicated. The OECD publishes a Compendium of Productivity Indicators. It also says that despite high employment, productivity growth remains weak. This is a significant problem for many Western economies and one that they have struggled to solve for some time.

As governments start to plan for a post-COVID-19 world, taxation is going to be a major headache. Governments are pumping vast amounts of money into economies to support businesses and individuals. Some of this is as loans and some as grants. All of this will have to be recovered eventually to help balance the national finances. This is where the AI Economist may get its first real test.

Salesforce could make the AI Economist available to researchers to look at new economic models. This would provide the underlying engine with enormous learning opportunities. It will also enable governments to model the challenges they will face over the next decade.

There is also the potential for using this to model the impact of different trade agreements. For the UK Government which is facing the economic double blow of Brexit and COVID-19, the AI Economist could provide a fresh approach.

Anything that simplifies tax law is likely to get broad approval from all levels of society. If that simplification means making tax fairer, the wider population will greet it with open arms. For those that may end up paying more tax, one of the benefits claimed for the AI Economist, is that it can account for tactics used to cheat or game the tax system. For those who use tax havens to hide their assets, the AI Economist may be more effective at identifying where investigations should be targeted.

Another challenge for governments is how to tax large online businesses. The AI Economist is not designed to resolve differences between national tax regimes, but it could potentially be used to suggest ways to harmonise some international tax agreements.