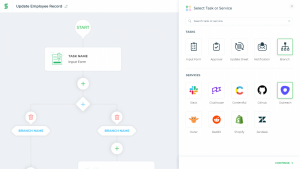 DronaHQ has announced the launch of an enhanced Workflow builder. The news came in a blog by Gayatri Sachdeva, Product Marketer at DronaHQ. The standard Workflow builder enables organisations to design workflows to run approvals, update data, call APIs and more without writing code.

Jinen Dedhia, Co-founder of DronaHQ commented: “This raises the ceiling on no-code capabilities. What earlier needed developer efforts or tech support, now non-tech users can themselves create marvellous process automation apps by just drawing out a flowchart on the workflow designer. This is a power-packed upgrade that we have taken live on the platform.

“Going forward, we aim to make integrations even easier with over 100+ OOB API integrations ready for the users. It is going to get even simpler for our non-tech users to connect their favourite apps without taking help from the dev.”

DronaHQ has created a new set of out the box 3rd party connectors. This is in addition to the existing integration with Zapier.

. In integrating to Zapier, DronaHQ is gaining access to a vast number of other applications within its workflow builder. It also means that companies no longer need to create or individually mesh API’s to the DronaHQ solution. This simplifies and speeds up the integration process for many.

Dedhia concluded: “We are actively adding newer services to our Workflow builder to incorporate all popular applications that customers use. Our aim is to have a rich repository of predefined connectors to enable anyone to quickly integrate with other systems and extend the system’s capabilities at ease.”

The DronaHQ REST API also enables micro-apps to send and delete notification to one or more users. It has extended the workflow designer and it now contains the ability to take the following actions:

Event triggers and follow-up actions can be easily configured in the enhanced Workflow builder. DronaHQ also claims that integration will become as easy as no-code app building. Additionally, the blog makes mention of mailing services, however, no supporting information could be found in the DronaHQ documentation.

While it is not a huge update by DronaHQ the integration with Zapier will make a significant difference for many customers. In a single update, DronaHQ has delivered the ability for customers to connect systems in a simple way. It extends the power of DronaHQ substantially. What will matter is what the customers achieve with this. Expect some interesting case studies to come to light shortly.

Leveraging an IPaaS such as Zapier makes simple connections easy. However, those integrations are limited and some customers requiring deeper integration may wish to revert to the APIs which still exist.

Gayatri Sachdeva contacted ENterprise Times with further information about the update. DRonaHQ is still working on the documentation for the release and she explained the following:

She also explained the update to Connectors buy ET has raised further queries around this and the article will be updated when this is received.