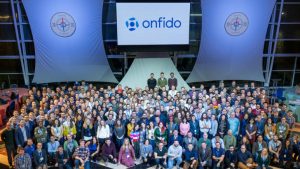 A little more than a year after its last funding round, Onfido the document ID and facial biometric company has raised $100 million in a Series D funding round. US investment firm TPG Growth led this funding round. It isn’t clear which other investors participated in this round. However, Salesforce Ventures, M12 (Microsoft) Ventures are still invested in the company.

Since its founding in 2012, the company has grown to around 400 employees spread across five countries. It now has a presence in North America, Europe and Asia. Onfido helps more than 1,500 companies verify their users using AI to assess government ID and facial biometrics. It achieved sales growth of 130% in 2019 and with this funding round could maintain or accelerate that growth.

Mike Zapprt, Partner at TPG Growth, commented: “Onfido’s use of AI to develop market-leading tech is extraordinary. There is enormous demand for secure and simple identity verification and authentication across major sectors, and we see Onfido becoming the new standard for digital access. Their team has done a remarkable job in a relatively short period of time, and we look forward to partnering with them to continue their momentum into new use cases and geographies.”

Preparing for the future

It is not difficult to see why TPG are enthused. Onfido has some significant achievements in the last year. Partnerships with ForgeRock, Ubisecure and the Faroe Islands to name three. It also strengthened its presence in the US in January with the acquisition of Aviata. It has grown on all fronts across its chosen regions with new customers and partners that will, in turn, deliver even more sales.

As Husayn Kassai, CEO and co-founder of Onfido commented in February: “2020 is set to be one of our strongest years yet, as we continue to grow our global presence, attract key talent and roll out Digital Access as a Service to enterprises. We’re also actively preparing for the future, with many of our engagements around reusable online identities entering their next phase of development, putting consumers in control of their legal identity and widening digital access to much needed online services.”

That preparation is now able to continue further into the future with the funding round completed.

Kassai commented: “Over the coming years, we’ll all be able to use our real identity to seamlessly access everything from financial services, online healthcare and trust marketplaces, to self-check-ins at airports, hotels and car rentals. Passwords will become a thing of the past as a method for accessing digital services, as will queuing for hours to vote in person.

The Onfido identity platform is sold to a range of industries including Financial Services, communities, gamin, transport and retail/commerce. It provides an identity verification solution based upon government ID and a short recorded video or image. Onfido checks and verifies more than 4,500 document types from 195 countries. Not just if the user is that shown on the ID but also whether the ID itself appears genuine. Its latest popular use cases include:

COVID-19 is having a significant impact on many organisations. Governments are implementing initiatives to alleviate hardship in a way that is fraud-resistant. Onfido is aiming to assist. Kassai commented:

“The COVID-19 crisis has created unprecedented change across industries and with the federal government considering issuing certificates of immunity, proving identity has never been more crucial.

“With the need for governments and organizations to know if people have had the virus and are now immune and able to go back to work, there needs to be a streamlined, digital way of verifying them. As the US looks to re-open its economy, it will be important that we accurately identify people who have recovered from the virus, so they don’t pose a threat of reinfection.

“We’ve already started working with some of the governments in Europe to make this process as seamless as possible so that there’s a fast, secure and reliable way to tie a physical human being to their digital identity using just a photo of their ID and a selfie video. We could see a similar process with the use of an Immunity Passport being effective in the US.”

What next for Onfido

The press release revealed that Onfido would invest in three key areas:

Enterprise Times: What does this mean.

Onfido now has the funding to support exponential growth and an opportunity to help eliminate passwords from many use cases.  There is still a challenge where cameras are not available, and biometric solutions may never completely rid the world of passwords. However, in the fight against fraud, Onfido could have a solution that can make a difference. The numbers are significant. Nearly all (99%) of the $800 million – $2 trillion of laundered money goes undetected. That is the equivalent of between 2-5% of the world GDP, according to the UN.