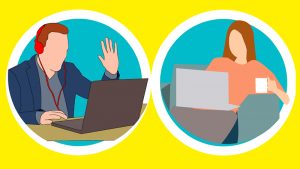 It’s an annoying day at the office. The executive team has gathered around a laptop for an important project kick-off call with a new contractor. Everyone’s excited to put a face to a name, but that isn’t going to happen today. The contractor is using a meeting room system that’s incompatible with the video service. No one can connect or see each other. Cue 10 maddening minutes of people trying to conference each other in on a phone line.

In 2020, you’d hope that video collaboration systems would all just work with each other, but interoperability still isn’t guaranteed. Some systems still don’t talk to each other out of the box.

Can video conference standards solve this?

This situation isn’t down to a lack of standards. There are formal standards for various aspects of video calls, ranging from the coding and decoding of video signals to those that allow one service to interoperably connect with another.

One such video conferencing connectivity standard is H.323, which the International Telecommunications Union (ITU) formalised in 1996. Although it comes from the telephony world, standards bodies have revised it several times to make it useful on IP networks. These are the most prevalent connectors for business-based communication (either video or voice) today.

The Session Initiation Protocol (SIP) is a little newer than H.323. It was built from the ground up for online communication through video and voice. Standardised in 1999, it is easier to implement than H.323. It also supports instant messaging or “enterprise chat,” as it’s come to be known.

Much more recently, another open source standard has gained massive popularity: WebRTC. One of its key advantages is that it became a foundational building block for Google Chrome, Apple Safari, Firefox and now Microsoft Edge. It allows for real-time media including audio, video and file sharing directly in the web browser. However, WebRTC doesn’t compete with SIP; it only delivers the media. It still needs a protocol to make the connection, and SIP meets that need.

Is WebRTC the answer?

Interoperability through WebRTC makes it possible for someone without a dedicated video conferencing device to connect with a company that uses a proprietary or closed boardroom conferencing system.

Web-based tools and meetings also make life easier for IT departments because they don’t have to worry about rolling out and enforcing app updates. The more video conferencing companies support WebRTC, the better off customers – whether end users or admins – will be.

Google also stepped back slightly from open standards when it switched from its classic Hangouts collaboration system to Google Meet. However, Google ended up working with a third party to create a gateway between Meet and other products.

Part of the danger of using proprietary technology to control integration with other platforms or products is that there’s a temptation to monetize it. One example is Zoom, which passes the cost of interoperability on to the customer. Its users can call any industry-standard H.323 system – so long as they pre-plan and do so via the company’s own H.323 Room Connector. This feature is subject to a handsome monthly fee that some call the ‘Zoom tax.’

The reality is that seemingly incompatible video conferencing systems can talk to each other. Often, they just need a little help in the form of interoperability. By working with an open, standards-compliant partner that continues to develop its technology to play nicely with other communication services and devices, you can be sure of a productive video call, regardless of ecosystem.

For more than a decade, Lifesize has been at the forefront of video collaboration delivering high-quality technology designed to bring people together. Our focus is on developing market-leading products that deliver easy-to-use and scalable audio, web and video conferencing. We combine an integrated, best-in-class cloud-based conferencing experience, with award-winning, easy-to-use HD camera systems and HD phones so that you can connect to anyone, anywhere.

The 5 Steps to Effective CUI Classification